'Beast from the East' and Storm Emma no fairytale for Armagh 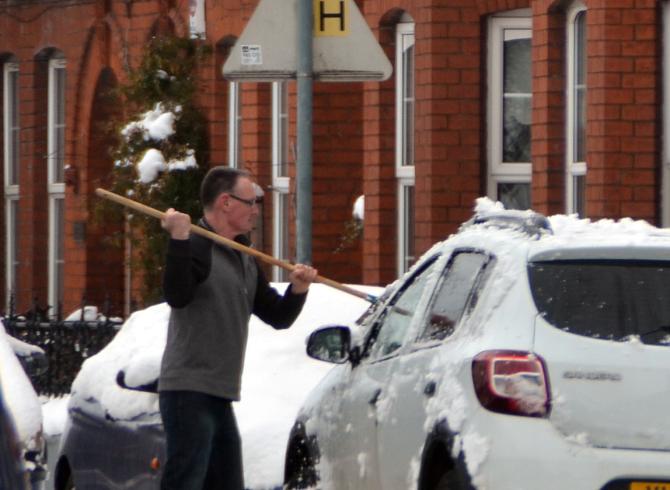 Extra time was needed to get vehicles on the road as this man discovered. KT181018.

DAILY  life ground to a halt as the ‘Beast from the East’ collided with Storm Emma, bringing major disruption to the borough by cutting off large swathes of rural areas due to heavy snowfall and subzero conditions.

March 1 may have been the official first day of spring – according to metrologists – but there was certainly no sign of warmer weather ahead  as snow ploughs were out in force in South Armagh as residents were snowed in as roads were left impassable in Keady, Newtownhamilton, Darkley, Clady and surrounding areas.

As the extreme weather front made its way over County Armagh heavy snow cut off rural roads, as a yellow weather warning was upgraded to amber as drivers were warned to only make necessary journeys – a warning that was reiterated as Storm Emma passed across the island of Ireland last Thursday (March 1) evening.

The Southern Trust was forced to cancel all outpatients clinics on all its sites, with maternity and Mandeville the only exceptions. The emergency departments at Craigavon Area Hospital and Daisy Hill, however, managed to operate as normal. A Trust spokesperson took to its Facebook page to praise the efforts of everyone involved in delivering frontline services through the cold snap. “Thank you to our staff who have gone to huge efforts to keep hospital and community services running overnight and into this morning [March 2],” they said. “We very much appreciate the support from our volunteers, family and friends and many other agencies who have been working with us.”

It was also ‘no snow day’ for domilicary workers who braved icy conditions to ensure house calls were made to their clients – many of whom elderly – located across the area. Homecare Independent Living, a homecare provider with its head office in Milford, said its staff and homecare teams had been “working around the clock” in order to ensure its clients would still receive services –  in spite of the horrendous weather.

Mairead Mackle, CEO of Homecare Independent Living explained; “In the health and social care industry we deal with real people, often our most vulnerable in society – there is absolutely no question of us being able to close our doors and go home.  This puts immense pressure on our entire team.  Their safety is absolutely our priority which means a significant reliance on support staff to plan as best we can.

“Without the unwavering commitment, passion and dedication of our care assistants and entire support teams from office staff to volunteer 4x4 drivers, we would not [have been] be able to deliver care at home to over 5,600 clients [last] weekend.”
She added; “I would like to personally thank every single member of our team and their families and all those in our industry, for going above and beyond to ensure their clients receive care. Please be safe.”

Elsewhere dozens of primary and secondary schools in Armagh, Tandragee, Markethill, Newtownhamilton, Keady and beyond, closed for two days as large parts of the county, along with Down and south Antrim remained badly affected by snow at the start of the weekend.

Such was the impact of the prolonged cold snap cold weather payments were triggered by the Department of Communities for qualifying households in BT60-71, after seven consecutive days of zero or subzero temperatures.

Meanwhile, St Patrick’s Church of Ireland Cathedral was shut for two days, as were all Armagh City, Banbridge and Craigavon council facilities as councillors engaged with TransportNI and council officers to ensure residential areas with grit boxes had supplies and pavements were cleared of snow. Weekend sport fixtures were effectively wiped out as the GAA postponed all football and hurling league games, while soccer was also badly affected.

While the amber warning was subsequently downgraded to yellow, which remained in place last Saturday (March 3) as forecasters warned of further snow.

Since the start of the year the area has been hit by a number of storms and icy weather. Early January Storm Eleanor hit the county, followed by heavy snow just weeks later, which subsequently thrawed, causing localised flooding in parts of the wider Armagh area.