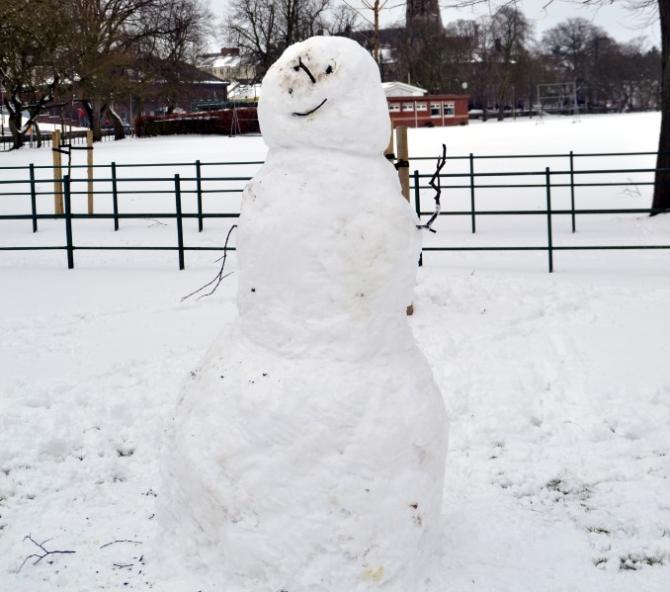 A lonely snow man on the Mall... The city was quieter than usual due to the severe weather. KT181033

A  NUMBER of Armagh City Centre traders were forced to shut for business during last week’s spell of extreme winter weather.
Footfall also appeared to be noticably down as members of the public either headed advice to remain indoors or were unable to travel into the city centre due to the harzardous road conditions – particulary last Thursday and Friday (March 1 and 2).

School closures right across Armagh also ensured the city was quieter than usual, and cancelled local bus services by Translink resulted in commuters unable to make in and out of the city from places such as Portadown.

Paul Slevin, chair of the Armagh City Centre Management Committee, said local business owners have to carefully weigh up various considerations when faced with adverse weather conditions. “Traders find themselves trying to balance the safety of their staff, many of whom probably travel in from outside of the city and opening up to find themselves with less customers,” he explained.

“For business owners it comes down to a question of whether or not they can get sufficient staff in, and if they can, is it worth it if there isn’t the footfall.”

Linwoods in Armagh was forced to withdraw its delivery vans off the roads for one business day due to the weather. However, the majority of its operations were back to normal the following day, as a company spokesperson explained; “Our dedicated staff did their very best to contact all retailers and alert them to the cancelled deliveries and provided updates as the day progressed.

“Our vans were back on the roads [last] Saturday servicing our ever loyal customers where possible, however the County Longford 800g bread supplier was not so easily accessed, and our supplier of Pat the Baker unfortunately had to halt their production of their famous bread.”

They continued; “This is some of the worse weather we have seen in the province in many years and our loyal customers were extremely understanding and supportive during this difficult period. As much as we all love the snow and the joy it can bring, thankfully the thawing has started and normal business can resume.”

Closer to the city, family-run store Emersons in Scotch Street had one particular weather-appropriate item prove to be a big hit with the public: snow sledges! “We sold 450 sledges last week, with the first pallet of stock sold out before Thursday lunchtime,” explained owner, Gavin Emerson. “By Friday lunchtime we had sold out again. I think people were heading up to the Palace and spotting a sledge and asking where they got it from.”

Overall, he added, trade had taken a slight dip, but quickly picked up again during last weekend. “Friday was a bit quieter but by Saturday it had come back again. All in all it was an okay week. There was no panic-buying, no clearing of the shelves, we didn’t have any of that.”

In rural areas there were reports of the weather having a knock-on effect on the agri-food sector as dairy suppliers were unable to access farms without extreme difficulty due the heavy snow, which had left many roads impassable.

Meanwhile, road gritters, farmers who deployed their tractors to clear snow – as well as local communities who rolled up their sleeves – to help keep routes operational, have all been praised by political representatives.

“There was a tremendous response over the past few days from the public who were quick to get their sleeves rolled up and grab the shovels to ensure that people could get to work and cars could get moving,” said Newry and Armagh MLA, William Irwin.

“There was also a great response out in the countryside from the farming community who used what machinery they had to help clear country roads which not only allow their farms to continue to operate but also ensured that rural dwellers could get moving again.”

Mr Irwin continued; “I handled many calls over the course of the bad weather and want to thank Transport NI’s snow plough drivers and gritter teams for responding to so many requests for road clearing. Hopefully that will be last of the winter weather and Departmental efforts and resources must now be focused on repairing the roads network.”

His comments were echoed by Armagh Councillor Sam Nicholson who said Transport NI staff had gone the “extra mile” to ensure roads were open and safe working “round the clock” in difficult conditions. “On a personal level I want to thank John Hall and his staff of the Roads Service Armagh office who helped me on a number of occasions by getting snow ploughs out to clear some rural roads to allow milk tankers access to dairy farms,” he revealed. “Otherwise the milk would have to have been poured down the drain.”