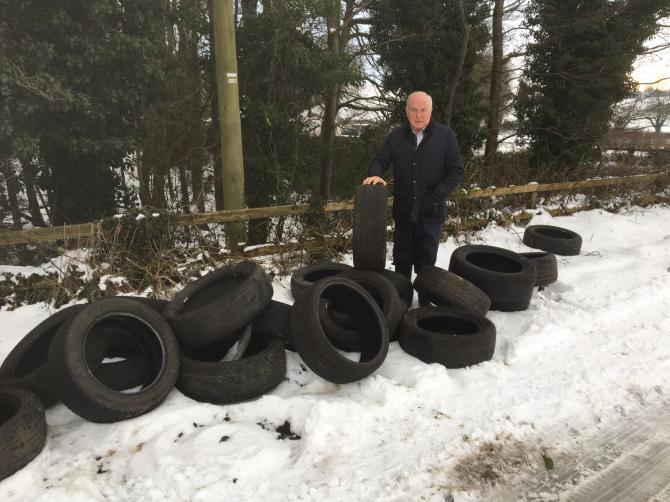 Alderman Jim Speers at the site of the dumped tyres on the Tannaghmore Road, Mullabrack on Saturday.

ALDERMAN  Jim Speers has blasted those responsible for the illegal dumping of tyres on a country road at Mullabrack as a disgrace.

A large number of used car tyres were discovered along the Tannaghmore Road on Saturday morning as incidents of illegal dumping in the area begin to increase.

“Anyone who would go out of their way to dump tyres in the countryside like this is beyond contempt,” said Alderman Speers.

“I was so disgusted when this was brought to my attention on Saturday.

“As well as the big pile of tyres dumped at the roadside it looks as though they have driven off down the road dumping tyres as they went – there are tyres lying along the roadside for a considerable distance.

“I have reported the matter to the council so that the tyres can be removed but this should never have happened in the first place and the council should not be left to clean up the problem.

“I would urge anyone who witnessed these tyres being dumped or knows who the culprit is to contact the police. The only message these people will understand will be a tough sentence handed down from the courts.

“I believe it also time for a change in the law. There needs to be a better way of being able to trace who owns these tyres that are being dumped, a serial number registered against the owner would help trace who bought the tyre and if tyres have been dumped by rogue traders then this would also help in tracing those people.”

The Newry and Armagh MLA was commenting after new figures show that up to 750,000 tonnes of waste were illegally dumped in tNorthern Ireland over the last ten years.

He said: “Hundreds and thousands of tonnes of waste have been illegally dumped in landfills to avoid landfill tax, a measure introduced by the British Government supposedly to encourage recycling and waste recovery but has actually led to huge increases in illegal landfill dumping.

“With only 66 convictions over the last number of years from 2008 to 2017 for those guilty of dumping in illegal landfills, clearly more needs to be done to ensure that illegal dumpers are brought to justice.

“The material dumped not only has has a financial cost to clean up, but damages our environment by contaminating the soil and has the potential to damage our health as it could seep into the water we drink.

“The British Department of Agriculture, Environment and Rural Affairs has introduced new penalties for dumpers which will be in place from the 1st of April 2018, which will ensure that those dumping waste will be liable for unpaid landfill tax.  Locally we need a stronger emphasis on enforcement and prosecution of those engaged in the criminal dumping of waste.”