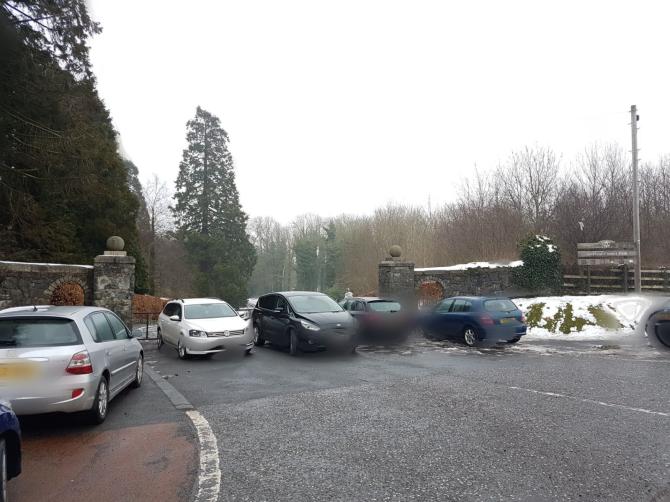 Cars parked across the main entrance to Gosford on Sunday. Pic by William Whiteside.

PARKING  problems at Gosford took a dangerous twist on Sunday as a number of motorists completely blocked the main entrance to the forest park.

The park was closed at the time for safety reasons due to the heavy snow and the gates were closed.
However as a number of people live in Gosford it meant those parking across the gates completely blocked these residents from getting in or out of their properties.

Despite the park being closed there were still a large number of people who had parked on the roadside and walked down to the forest. The action of blocking the entrance meant that paramedics would have been prevented from gaining access to Gosford in case of emergency.

And those who parked across the entrance also prevented a ranger from getting into the park to feed the livestock – on a day when this was particularly needed.

There have been ongoing problems with large numbers of motorists insisting on parking on the hard shoulder of the main Armagh to Newry Road and then walking down in to Gosford rather than pay the entrance fee. There have been numerous appeals for this practise to be stopped but despite meetings involving the PSNI, ABC Council, Transport NI and the Forestry Service the problem persists.

However Gosford resident, Donald Whiteside feels that the matter escalated to become even more dangerous on Sunday.
“It was incredibly frustrating for those who live in the park to be essentially trapped in their own homes while people parked across the main entrance to the park,” said Donald.

“However there were a large number of people in the park at this time despite the treacherous conditions. A young child could easily have slipped on the ice and needed medical attention, the action of blocking the entrance would have meant a significant delay in paramedics getting to the patient.

“The last time there was heavy snowfall and the park was closed a man did fall and sustain a gash to his head. Thankfully his friend was on hand to help him but these things do happen and people need to be more considerate when parking.

“It is great that people are using Gosford but I would urge them to think about the impact their actions such as parking across the entrance could have on other park users and those people who live in the park.”

There was anger on social media on Sunday evening with many calling for the issue of people parking on the hard shoulder to be sorted out once and for all.