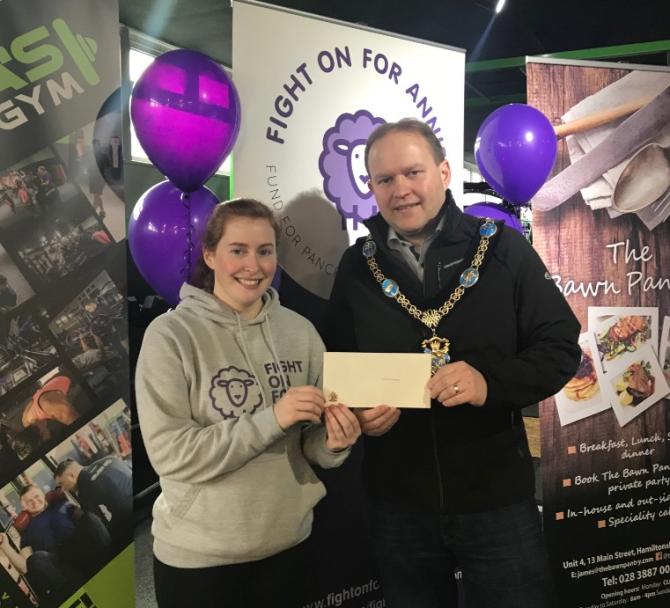 Grainne O’Neill accepts a donation for the Fight on for Annie Fund from Lord Mayor, Alderman Gareth Wilson.

HUNDREDS of people have supported the fight against pancreatic cancer by taking part in a 24 hour prowler challenge.
The challenge was held at Bubba’s Project Gym in Armagh, between 7pm on Friday, January 26 and 7pm on Saturday, January 27.

It was a very hard task as it did not take long for participants legs to burn.

This particular challenge was decided on because the prowler represents a lot of things including the cancer patient getting the distressing diagnosis, pushing through the pain of their treatments, constant needles, surgery, maybe even hearing that their treatment isn’t working and the worry and fear about their future being uncertain.

Other people jumping in to push the prowler represented how it is not only the cancer patient effected by the diagnosis, the pain of watching their loved one being sick and going through this horrendous time of their life, the pain and anger that cancer has hit their family, as well as the worry and stress whilst trying to continue with life while their loved one is fighting this disease.

It also showed that even when the survivor beats cancer, there is the fear that it might come back again, or even worse, the prowler is the pain, heartache and grief that the family of those who lost their loved ones carry around every day as they miss them dearly.

The reality of pancreatic cancer is that just five per cent of patients survive and it has the worst survival rate of all 22 common cancers.

Pancreatic cancer is the fifth biggest cancer killer with 26 people diagnosed each day and 24 people will die each day.

It receives just over three per cent of overall cancer research funding a total of only £8 million in 2015.

Pancreatic cancer affects men and women equally and for those diagnosed in time for surgery, their chance of survival increases significantly.

In 2014, 9,614 people were newly diagnosed with pancreatic cancer, while a further 8,834 people died from the disease in the UK.