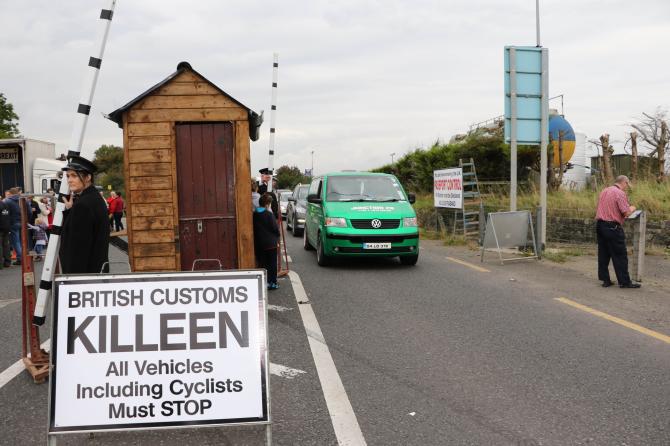 Border Communities Against Brexit staged a fake border check last year. The recent announcement by the European Commission that Brexit will bring an end to “mutual agreement”

LOCAL UK driving licence holders making cross-border journeys could find that they have to pay for a special permit post-Brexit in order to drive in the Republic.

A recent announcement made by the European Commission stated that Brexit will bring “mutual agreement” between the EU and the UK to an end, consequently invalidating UK driving licences within the EU as “all current EU law-based rights, obligations and benefits [would] cease”.

The development has subsequently further added to the ongoing uncertainty over how the border between Northern Ireland – which runs for 310 miles – will facilitate travellers and the estimated 30,000 workers who travel across it daily. Cross-border motorists driving into the Republic currently can do so if they have a full UK licence, however, once the UK exits the EU, they
may have to purchase a 12-month International Driver Permit – which has to be applied for in advance –  at a cost of £5.50.

The prospect of drivers locally affected has prompted Newry and Armagh MP, Mickey Brady of Sinn Féin, to reiterate his party’s call for Northern Ireland to receive designated special status under Brexit. “The news that the driving licenses of citizens in the north could be incompatible once they cross the border is another example of the invasive and disruptive impact of the Tory-DUP Brexit,” explained Mr Brady.

“Tens of thousands of citizens travel across hundreds of border crossings every day for work and study, while countless villages straddle the border corridor. We need Designated Special Status with full regulatory alignment to protect all-island integration, and guard against the destructive nature of Britain's impending Brexit border in Ireland.”

SDLP MLA Justin McNulty said he was “astonished” at the possibility that UK driving licences may not be automatically valid in the Republic post-Brexit. “It’s almost two years after the UK vote to leave the European Union and now the lunacy of the decision is really starting to hit home for some people,” he said. “The European Commission has said Brexit would bring an end to mutual recognition of driving licences between the UK and the EU.  While this might seem as some little technicality that might not impact on many in England, Scotland and Wales, it will have a major impact for those of us who live and work and travel on the island of Ireland.

“Cross-border travel is a frequent and often daily occurrence for many of us living here, especially in border communities.  Many local people travel south for their work and for leisure, and now even going to work or to a game in Clones or Croke Park could potentially be fraught with difficulty. This really shows up the lunacy Brexit will bring. Some are suggesting a permit will be required to allow us ‘northerners’ to drive in the south. Even by suggesting this, the policing of such a crazy move would necessitate border checks.

“Brexit is the most complex political challenge facing this island for many generations and if someone in Whitehall doesn’t soon realise the impact on everyday life here, we are going to be stuck in some sort of economic and social backwater.”
Revealing that he has written to Tánaiste (Irish Foreign Minister) Simon Coveney to ask that this issue is raised with the European Commission and the UK Government,” Mr McNulty continued; “Simple issues such as this will make life very difficult for all of us in border communities and especially those people employed on a cross-border basis.  This issue must be swiftly addressed.”

Newry and Armagh DUP MLA, William Irwin, however, stressed that it is important that “workable solutions” are found to resolve any potential difficulties for cross-border drivers. “As we have seen in recent days if attitudes amongst the EU negotiators harden, as they have done on occasions in recent weeks, then difficulties arise that cause progress to slow,” he insisted. “It’s so important that the EU approaches the negotiations with the right frame of mind. The UK is leaving the EU, that is a fact and it is in everyone’s interest to use this period of negotiations to ensure that the best possible arrangements are reached for the people of the UK, and indeed, it is in the wider EU interest not to be obstructive in their approach.”

He continued; “Driver licensing is an interesting issue and it is of course one such area where the potential for difficulties could arise which may well place requirements on drivers. However, it is precisely this type of issue that negotiators must work through and bring forward workable solutions. I am quite confident that an acceptable solution will be reached to settle any fears on driver licensing and remove any onerous requirements.”

It is understood that if an agreement is failed to be struck between both parties then the British government has the option of evoking the 1968 Vienna Convention on Road Traffic, an international treaty designed to facilitate traffic and road safety by establishing standard traffic rules among involved parties. By ratifying the treaty, it would ensure that UK driving licences would be accepted throughout the EU, however, they would still require an accompanying International Driving Permit – according to the UK Department for Transport.

The treaty itself, argues Upper Bann UUP MLA, Doug Beattie, provides the basis for a resolution that is in the “best interest for both parties”. “It is clear that when you dig down into the weeds of Brexit there are a multitude of issue that will need to be dealt with,” he explained. “Recognition of UK driving licences within the EU is one of them as is the recognition of EU member states driving licences in the UK. It is clearly in everyone’s interest – the UK and the EU – to find a way where there is no hindrance to the transport of goods, tourism or general movement throughout Europe.

“The Vienna Convention of Road Traffic gives very clear guidance on issues surrounding transport and as the UK is a signatory – along with Ireland and the majority of the EU member states – it would be inconceivable that the UK driving licences would not be accepted anywhere in the EU27 and vice versa. Leaving the EU does not mean that the UK levels of diligence in respect to driving licences will change; so if the EU accepted that the UK driving licence was an acceptable proof of driving proficiency previously, then I can see no reason why after the UK leaves the EU, they would view the document in any other way,” he said.