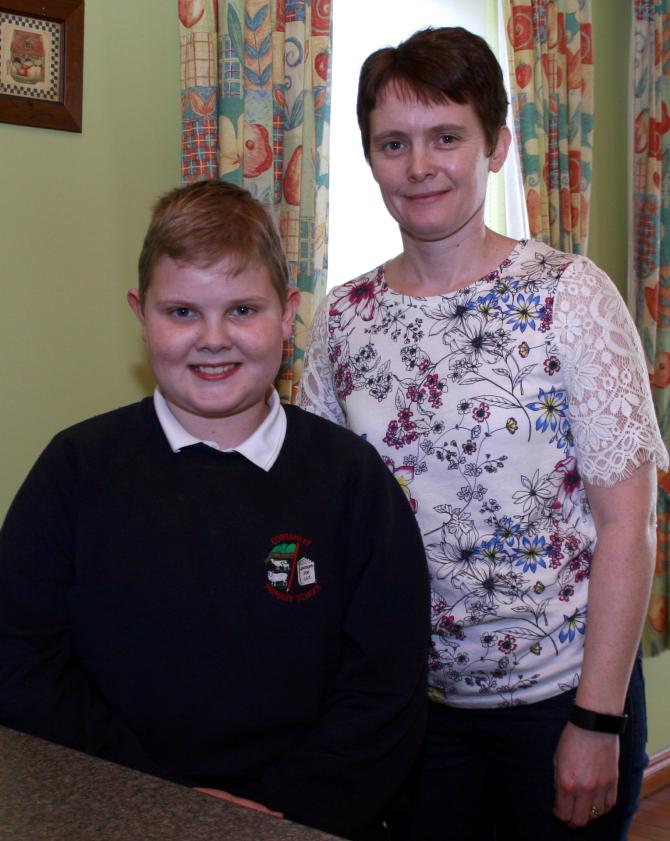 Matthew with his mum, Denise at their home in Cortamlet.

LAST  Easter Cortamlet boy Matthew Leeman found himself in a medically-induced coma due to serious head injuries he sustained after falling off a trampoline. Nearly a year later, the ten-year-old has thankfully made a full recovery, and now he and his family want to show their gratitude to medical staff who cared for him by raising funds for a children’s hospital unit.

Matthew, who attends Cortamlet Primary, hit the back of his head on concrete, knocking himself almost completely unconscious after falling off a trampoline while playing outside with a friend at his home on Good Friday (April 14) 2017.
His mum Denise, distraught, immediately dailed 999. “He was practically unconscious,” recalled Denise. “Within 14 minutes a paramedic had arrived and he was thankfully breathing.”

An ambulance crew then arrived and the decision was taken to place Matthew into a medically induced coma. “With anything to do with head injuries they told me that it was best, as it would give his brain rest and give him the best chance for recovery. It was frightening. At one stage they’re were saying that Matthew might have to be airlifted to hospital. They were considering whether to send him to Craigavon or Daisy Hill when a specialised doctor, who arrived in his own car, decided it should be the Royal.”

Initallly admitted to the Royal’s A&E, a scan revealed the full extent of Matthew’s head injuries. “The scan was carried out when he arrived and it revealed that he had fractured his skull on both sides and had bleeding on the brain,” explained Denise.

Matthew was later transferred to the Paediactric Intensive Care Unit (PICU) at the Royal Victoria Hospital for Sick Children, still in the induced coma. “They thought at one stage that he might need surgery to relieve the pressure on his brain. There were signs of him coming round though, in fact the first was the twitch of his wee finger, the last was when he actually pulled out his ventilation tube and came out of it,” she added.

“He lost a week of his life basically, Matthew couldn’t remember being in the PICU.”

A week later Matthew was discharged from hospital, and was keen to get back to school and returned along with his friends following the end of the Easter holidays. “He wanted to get back into the routine. Matthew started off with a couple of hours, then to dinner time and then back to full school days,” explained Denise. “He’s made a miraculous recovery, medically he’s back to normal and can do everything he could do before.”

And that’s all thanks to the medical staff who cared for her son, added the Cortamlet woman. “The nurses are so dedicated to their patients. They kept us informed at all times and told us everything they were doing, they were fantastic.

And to thank them the Leeman family has launched a fundraising campaign to raise funds for the PICU, starting with Matthew’s sister, Judith – a pupil at Newtownhamilton High – who is holding an Easter Egg fundraiser in the school with help from her cousin, Laura Nesbitt. The pair have organised an ‘adopt a square’ fundraiser. For £1 pupils, staff and friends can purchase a square to win one of three Easter Egg prizes with squares on sale from the school office, which can also be purchased directly from Judith and Laura. The draw will take place next Wednesday (March 28).

Meanwhile, Denise’s friend, Jill Todd is helping them hold a coffee morning in Corkley Orange Hall on Saturday, April 14 between 10am and 1pm.

Hoping to raise as much funds as they can, the family has set themselves a target of £1,000 with the family pledging a considerable amount themselves to start it off. ”I’m so thankful for the support from the community we’ve had already. When Matthew first had his accident I received so many texts. The amount of support was amazing, everyone just rallied around,” revealed Denise. “Our target’s £1,000 but if we could get to £1,500 or even £2,000 that would be great.”