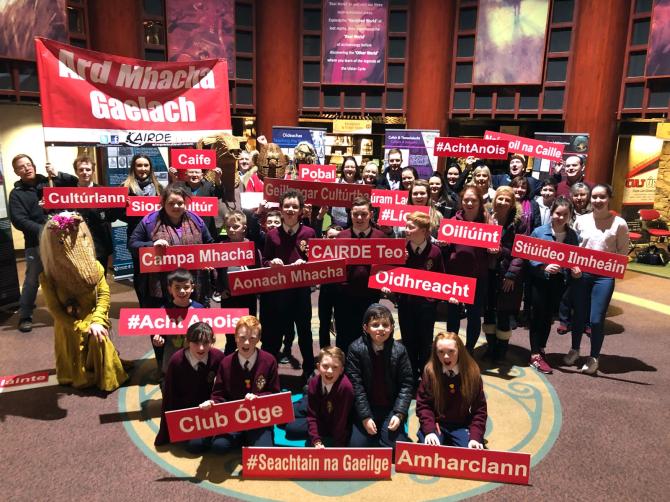 The Navan Centre was the venue for the launch of the Irish language festival in Armagh, which took place on Wednesday, March 8, having been postponed due to the weather.

The festival, which ran from March 1 to St Patrick’s Day, got off to an inauspicious start with the heavy snowfall disrupting events around the country, but Armagh Gaels ensured that there would be plenty to celebrate during the 17 day language festival.

With the unexpected snowfall early on, many local children and families took part in a special snowperson-building competition to get the festival underway, before the programme got back on track on Sunday, March 4.

A courageous group of Gaeilgeoirí braved the cold and headed to the hills to enjoy the winter scenery on Slieve Martin and the fantastic views over the snow-covered countryside below. There was a large crowd present to listen to a fascinating talk by language scholar, Seán Mac Labhraí, who spoke of the native Irish speakers of Ulster and in particular of Armagh and their influence on the local dialect of English.

The Navan Centre was the venue for the postponed launch of the festival, which took place on Wednesday, March 8, and those in attendance were treated to a fantastic set of tunes from the Smyth family, who are all accomplished musicians and members of Armagh Pipers Club.

An Irish language quiz at the Athletic Grounds in Armagh was enjoyed by over one hundred competitors from right across the province, with the winners from Cornafean in County Cavan. The Armagh parkrun at the Palace Stables on Saturday, March 10, saw an Irish language contingent take part in the weekly 5k run and a particular highlight for Armagh Gaels on Saturday evening was the presentation of two national awards for promotion of the Irish language to Cairde Teo.

Local schools also took part in the festival and held a number of events and hosted a number of guest speakers who talked about the importance of the Irish langauge in their jobs and the advantages of speaking two languages.

The festival in Armagh finished off on St Patrick’s Day itself with two Irish language religious services in the two cathedrals, with an Irish langauge mass led by Monsignor Ó Muirí, followed by a celebration of the Eucharist in St Patrick’s Church of Ireland Cathedral.