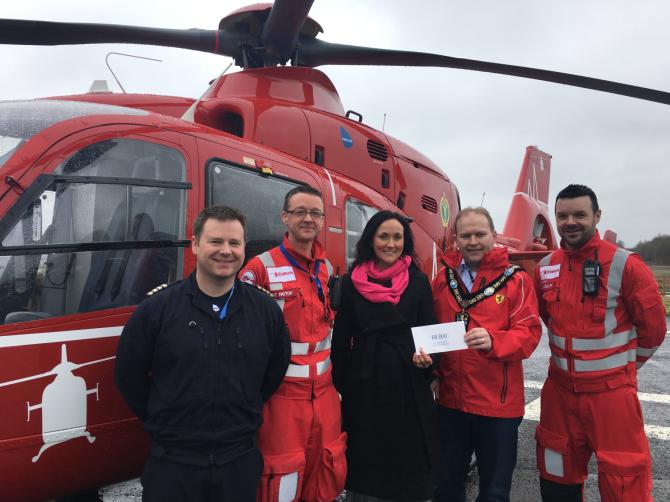 Alderman Wilson delivered his second cheque as part of his continued fundraising efforts for his chosen charity.

The money was raised over the last few months through the generous giving of the public at council events and functions such as Georgian Day, staff events and special community receptions.

He stated: “It was so positive to travel down to the HEMS base at the Maze and hand over a £6,000 cheque to Kerry Anderson, the head of fundraising for the Northern Ireland Air Ambulance.

“It was also really great to meet with one of the pilots Richard Steel, paramedic Mike Patton and consultant Aiden Cullen.

“As part of my year as Lord Mayor, it is important to raise awareness about the charity and as £2million per year has to be raised to help fund the service, I decided along with the cheque presentation to also do a short video with the Air Ambulance crew to publicise who the great people are that operate the service and this can be viewed on my Facebook page ‘Cllr Gareth Wilson’.”

Alderman Wilson said he wished to thank the public sincerely for their very dedicated giving to this great cause, before adding “it is a service that any of us could need at anytime”.

“Along with the generous public, I will continue to fundraise for the Air Ambulance and I look forward to hosting many more events over the next few months such as a Cars, Bikes and Coffee fund raiser event at the Craigavon Civic Centre on 3rd May at 7pm.”