Business as usual at Keady supermarket

Rice's vow to continue to serve community after ATM attack 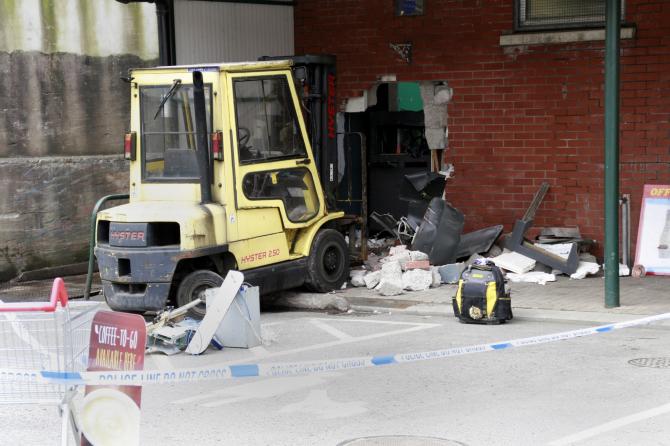 The scene at Rice's supermarket, Keady after an overnight attack on the ATM.

THIEVES have used a forklift to rip an ATM from a wall in Keady.

The robbery happened in the early hours of last Wednesday morning at Rice’s Supermarket on Victoria Street.

This is the second time the ATM has been targeted after a gas explosion was used to blast the machine in 2014.

Police have said they do not yet know the value of the damage caused by the incident, but that the ATM would have contained a "subtantial quantity of cash".

In a statement on the PSNI Armagh Facebook page, a spokesperson said: "Did you see any people in or around the forecourt, or waiting nearby in vehicles? Do you have dash cam footage of any people or vehicles in the area? Please, if you have a dash cam, back the footage up and get in touch with us. Something you think is nothing could be what solves this case.

"Our detectives need your help. This isn't a case of rich v poor, this isn't a Robin Hood-style taking from the banks - this is your money. This is your local business which now has significant structural damage and will be significantly out of pocket over this. If you know who's responsible, don't give them a hiding place.

Meanwhile, Mark Smylie, store manager, insists the supermarket will open as normal after the setback.

“We want to inform the local people that we are still here and open as usual,” Mark said.

“This won’t close us and we will be open the same hours every day to serve the local community.

“It is a big shock for us and there is a lot of damage to the building.

“This is the second incident involving our ATM and it’s affecting the local community.

“We would like to advise our customers that they can still use cash facilities in store at the post office.”

“When the news broke I went down to the scene first thing,” Darren added.

“It looks like it was carried out by a criminal gang with a high level of organisation and sophistication.

“It is an attack on the whole community and this isn’t an isolated incident.

“It seems like people won’t be happy unless there are no bank machines in Keady.”

Alderman Freda Donnelly described the attack as an attack on the community and urged anyone with information to contact the police.

“This was a despicable attack carried out on a business which provides first class service to the community,” said Alderman Donnelly.

“I would urge anyone who witnessed anything or knows something about the theft to contact police immediately.”

Mr Irwin said he was concerned by the theft at the supermarket in the town and the damage caused to the building and urged the public to assist the PSNI with their inquiries.

“This was an audacious raid on a shop in Keady using a forklift truck to break open a wall and get access to the banking machine. I understand that money was taken from the ATM and the criminals made off with a sum of cash.

“There have been a number of these types of raids involving the forced removal of ATM’s and indeed locally some instances have seen mixtures of gases used to explode the machines out of their housing which is extremely dangerous and reckless.

“I would urge anyone who may have witnessed anything suspicious to immediately report any detail to the PSNI in order to assist with their inquiries. This criminality must be stopped and those behind it most face the full rigour of the law,” Mr Irwin added.

Anyone with information about the theft can contact the PSNI on the non-emergency number 101 quoting the incident number 176 with the date 21/03/2018, or alternatively can contact independent charity Crimestoppers on 0800 555 111.