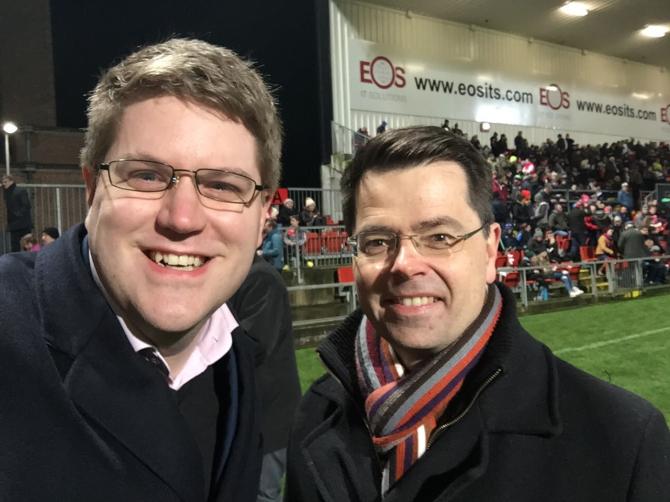 Next Tuesday (April 3), it’s understood he will move from the Northern Ireland Office to start his new job at the Home Office in London, where he will join the four-strong political team which advise Ms Rudd on Home Office matters.  It’s understood Peter will advise the Home Secretary on policy and press matters regarding equalities, modern slavery and Brexit.

Peter, who lived in Richhill until he moved to England to go to Oxford University, still frequently visits his parents, Ken and Sandra Cardwell, and is a familiar face around the village despite spending most of his time in London.  Ken Cardwell is a former principal of Tandragee Primary School, and Sandra Cardwell spent much of her career working for the then-Southern Education and Library Board in special education.

For the past 20 months, Peter has flown virtually weekly between London and Belfast, constantly at the side of both James Brokenshire and then Karen Bradley as they navigated the choppy political waters at both Stormont and Westminster.

When contacted by the Ulster Gazette, Peter said: “I’m afraid I can’t really talk about it, other than to confirm that, yes, Amber has given me the green light.”

Sky News Ireland correspondent David Blevins, who himself lives locally, told the Ulster Gazette: “Peter is seen by the Northern Ireland press pack as a tough but fair operator who, as a former journalist himself, understands what we need to know.  He was fiercely loyal to both James Brokenshire and Karen Bradley during the tumultuous political times of the past year-and-a-half and I have no doubt he will be similarly tough and loyal to Home Secretary Amber Rudd.  I’ve known Peter since he was a 13 year old school boy and he has worked hard to achieve what he has.”

His first job was as a researcher on Newsnight, working closely with presenter Jeremy Paxman in London, as well as Washington on the 2008 Presidential election. He then studied for a Master’s degree in journalism at Columbia School of Journalism in New York, where he was Alastair Cooke Fulbright Scholar. Over the next 10 years he worked both in front and behind the camera at the BBC, Sky News, UTV and ITV’s Good Morning Britain, before James Brokenshire recruited him to the Conservative Party and Northern Ireland Office.