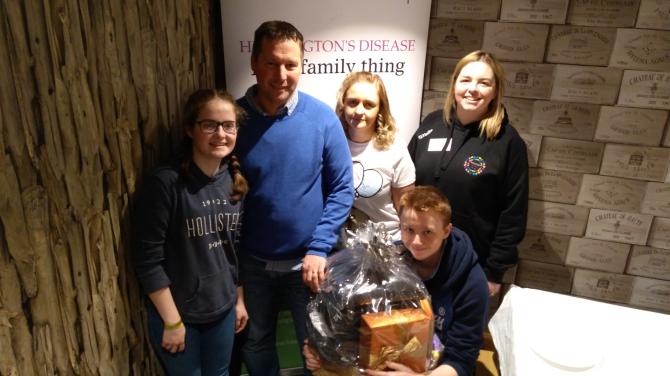 THE  fundraising efforts of an Armagh family has helped secure a youth worker post for a charity after raising over £40,000 with the help of the wider community.

Just over a year after Janice McCartney and her family held their first fundraiser, a coffee morning in Collone Farmers Hall in March 2017, a total of over £41,000 has been raised for the Huntington’s Disease Association NI (HDANI).

It’s a charity very close to their hearts as Janice’s father, George Heatrick sadly died of the condition at the age of 58 and her cousin, Helen Hawthorne lives with HD. Known as the “disease of families”, the genetic nature of Huntington’s means that if a parent has it, then their child will have a 50 per cent chance of carrying the genetic mutation that causes the disease. Suffers experience impaired physical mobility, as well cognitive function, among other symptoms. There is currently no cure for the disease.

A barn dance, headlined by country sensation, Ritchie Remo, along raised around £33,000 and Janice has previously spoken about how “absolutely thrilled” by the show of support from local people in supporting their fundraisers.

Now the McCartneys, along with their Hawthorne and Heatrick family members – who have participated in Belfast Marathon in two separate years to raise money for their campaign – have learned more about how the much-needed funds will be used by the charity. HADNI chief executive, Sorcha McPhillips, explained how the funds will bolster its services, which require £95,000 a year to keep running. “The post of sessional youth worker and counsellor has been secured for the next three years solely due to the amazing fundraising in Armagh. We are incredibly grateful to Janice and her extended family; the Hawthornes, Heatricks and McCartneys and everyone who volunteered, sponsored, donated and attended their events,” she revealed.

“Our youth worker Michelle McGrath made a wee presentation to Janice McCartney, her son Jake, Alan Hawthorne and daughter Sophie at our HDANI Youth launch event [held recently] in We Are Vertigo.”

The boost to the charity’s youth programme is something that Janice is particularly pleased with. “We’re so delighted,” she revealed. “When I was growing up with Dad having Huntington’s, we had no help whatsoever, so we’re just so delighted we were able to have a say in how the money’s being used. The youth service is so important.

“Once again we want to thank the community for getting behind us and making it happen It was a year on Saturday from we had our coffee morning, and a year on to have the launch party, is amazing.”