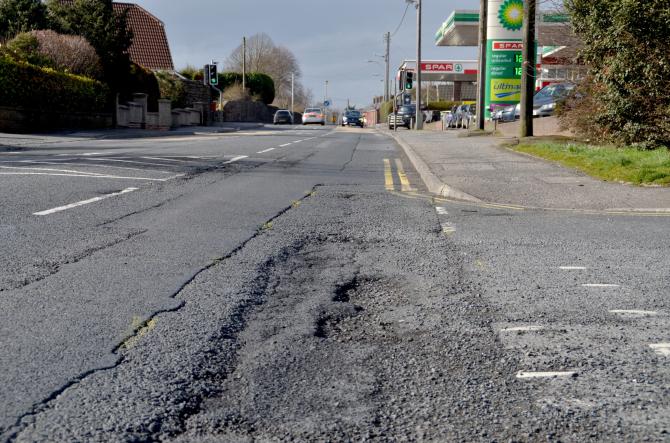 Potholes and defects on the Newry Road, Armagh.

TRANSPORT NI chiefs have acknowledged that the Newry Road in Armagh is in a poor state of repair and needs priority work carried out on it.

The news comes after a number of angry motorists contacted the Ulster Gazette in recent weeks to vent their anger at the alarming number of potholes and defects on the stretch of road between the police station and the 30MPH signs.

Roads Chiefs have set aside millions of pounds to help repair our crumbling road network.

A Departmental spokesperson said: “The 2018/2019 roads structural maintenance capital budget is £75m. Of that, £15m has been set aside for a roads recovery fund which will address areas of immediate need across the road network.

“This year's winter weather has been more severe and prolonged than usual and this has undoubtedly affected the condition of the road network, in particular in rural areas. Indeed, the Department's winter service team have spread more than 114,000 tonnes of salt, the most ever used in one season.

“In addition, almost 40,000 surface defects have been repaired in the last few months. The Department will continue to
identify those roads most in need of repair and prioritise this work with larger scale proposals, such as those planned on Newry Road between the Police Station and Cavanacaw Road, in the coming months.”

Before news of the planned repairs broke another angry motorist contacted the Gazette to hit out at the state of the Newry Road.

“I travel this road around six times a day and the centre of the road is actually disintegrating right in front of the eyes of motorists, it’s so bad that drivers have to move left and right to avoid these widening pot-holes, possibly leading to a serious accident. Are the powers that be waiting for these accidents to happen,” said the Armagh who did not wish to be named.

“I just paid my yearly car tax on 31/03/2018 and I always thought that this tax was for the upkeep of our roads – I don’t believe this happens any more, so why should motorists be asked to pay Road Tax when this money is diverted to somewhere else. No point in asking our politicians for answers to this, they are completely useless.”

Mr Nicholson said: “I would have preferred if a Northern Ireland Finance Minister would have been the one to produce and present this Budget, but in the absence of an Executive it has been necessary for it to proceed through Parliament.

“The provision for "limited routine roads maintenance service" as part of the budget to "repair of large potholes" is very welcome however there is no actual detail given in terms of just how much will be made available and where exactly it will be targeted. Given the current state of our roads this lack of detail is a great concern.

“It will include allocations to target pressures on health and education and other important frontline public services. However I genuinely fear that even with these new allocations Departments still will not be able to balance the books and as a consequence will again scramble to make emergency in-year savings.'

“£200million for infrastructure from the Confidence and Supply Agreement will provide a welcome boost to available funding for infrastructure projects so I hope that our MLA's are lobbying for some of that money to be earmaked for example into the developing, planning and construction of the Armagh City link roads which are long long overdue and badly needed.”