Walking for a month to raise awareness of ovarian cancer 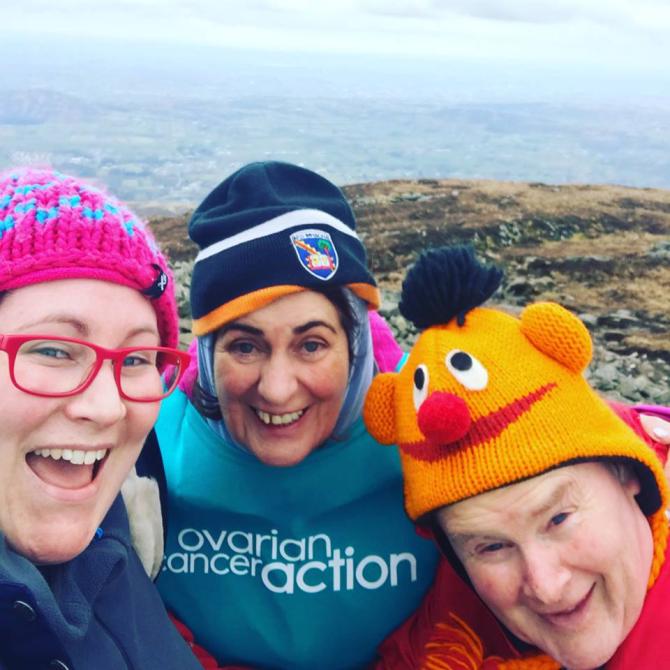 Armagh scientist Dr Caoimhe Nic An tSaoir (left) is pictured with her parents Ursula and Seán.

AN Armagh scientist has marked ovarian cancer awareness month in March by walking 165km to raise awareness of the disease.

Dr Caoimhe Nic An tSaoir, a 32 year old from the city, finished her final kilometre on Saturday, March 31 at Slieve Gullion Forest Park and is delighted with the success of her challenge.

Every day, Caoimhe walked a chunk of the 165km – a distance she chose to represent the number of women who are diagnosed with ovarian cancer in Northern Ireland each year.

Caoimhe set herself the sponsored challenge as she knows first-hand how important both medical research and public awareness are in the fight against ovarian cancer.

“I used to work in Queen’s University’s Centre for Cancer Research & Cell Biology where I researched BRCA1, a gene that can increase a woman’s risk of ovarian cancer when faulty,” explained Caoimhe.

“With a background in cancer research, I wanted to do something to highlight why supporting scientific research is crucial to making progress.

For Caoimhe, raising awareness of this often-overlooked disease is just as important as raising money.

Caoimhe shares a new fact about ovarian cancer with her local supporters after each walk. She does this by linking a detail of her walk (such as the distance travelled that day) to a specific statistic about the disease. By doing so, she hopes to build up ovarian cancer awareness in her community with each kilometre she travels.

“I liked the idea of doing something on a daily basis to re-enforce awareness,” she said.

“Instead of doing one walk in one month, I thought I’m going to be here walking and talking about ovarian cancer, the incredible research that’s ongoing, and sharing where people can find more information across the 31 days of OCAM (Ovarian Cancer Awareness Month).

“So, I decided to share nuggets of information with each walk I do. For example, after walking 7km one day, I posted about seven key ovarian cancer symptoms to look out for. And feedback has been really positive!

“My family and friends are enjoying picking up new pieces of information.”

In fact, much of the community has been getting involved with Caoimhe’s month-long challenge.

“Everybody’s been great! I’ve been excited by how many people I know are engaging with what I’m doing.

“People have asked me, “When can I join you on a walk?” – my Mum came out with me on Mother’s Day. And that’s what it’s all about. It’s about community, raising awareness, and getting people involved.”

Caoimhe has so far raised £1,504.69, breaking her original target of £300, which she raised to £1,000 when it became clear how much support she had. All the money raised will be donated to Ovarian Cancer Action.

“Ovarian cancer can be a deadly disease that doesn’t receive the recognition it deserves. The money she raises will go towards truly vital research.”

Ovarian cancer is the sixth most common female cancer with more than 7,400 diagnoses in the UK each year.

Anyone wishing to find out further information should visit ovarian.org.uk or to donate, visit: https://www.justgiving.com/fundraising/165kmmarchtofightovariancancer