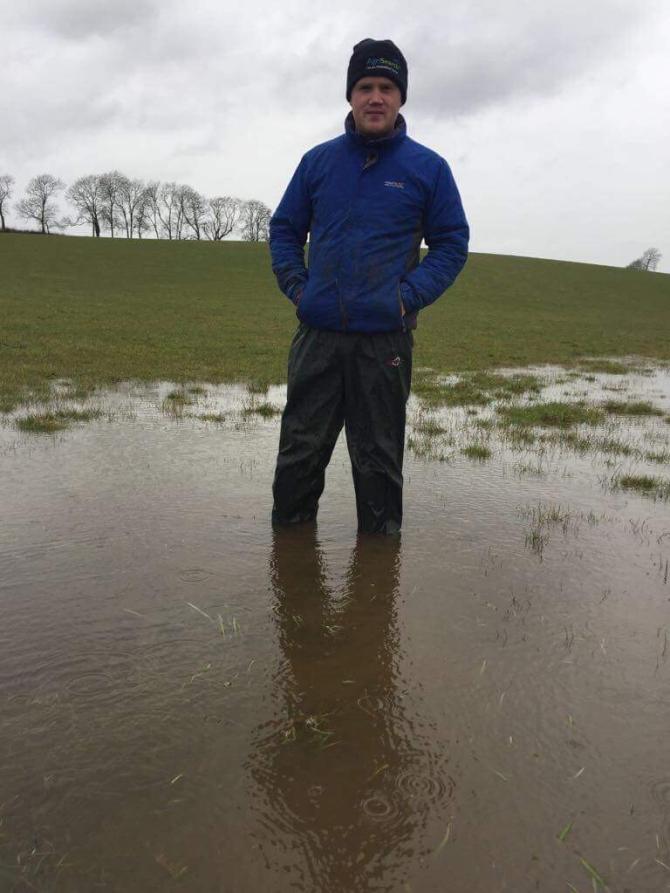 James Speers pictured on his family farm outside Mullabrack. The harsh weather has caused major problems.

THE weather since last August has caused ‘major problems’ for the farming community, according to James Speers.

James – who is the President of the Young Farmers Club of Ulster – has been left frustrated as the weather has taken its toll for the last eight months.

Farmers are struggling to get slurry out on the ground, fertiliser to grow grass and crops, and it has had an effect on spring lambing as there has been no grass growth due to the wet weather.

“To be honest, the weather has been disastrous since last August,” James said.

“The severity of it has had a serious impact and it is causing major problems.

“The silage supplies from last summer have been totally exhausted due to stock being housed early last year and also not being able to get out early this Spring.

“It’s a bit of a torture, but unfortunately we can’t control the weather.

“We are hoping for better conditions in the weeks ahead.”

The Markethill man also explained that farmers are having to fork out extra money for feed supplies. This can have a detrimental effect on farming incomes.

“Farmers were hoping for an early Spring so they could get stock out,” James added.

“The ground conditions have made it impossible and it just leads to problem after problem.

“Then, to make matters worse, the soil temperature isn’t warm enough for the grass to grow back.

“Speaking on a wider context, the financial costs can vary, but farmers are having to source extra feed and this can be a strenuous burden.

“Slurry tanks have also been filled to capacity but they are unable to get out.”

James insists he will take one day at a time but is optimistic that there will be a ‘light at the end of the tunnel’ to end the unbearable conditions.

“I’m a great believer in taking one day at a time,” James continued.

“It would be great to see some nice weather.

“If you look at fields that grow arable crops across the Province, they have yet to be ploughed.

“Everyone connected in the farming community has said that this is one of the worst years they’ve ever seen.

“It’s a detriment to the community that there is no local government or agricultural minister because there is nobody there to take a quick action on local issues.

“Of course, they wouldn’t be able to stop the bad weather, but having someone at hand would make a difference.”

James was also quick to pass on some advice for farmers who are wanting some answers.

“This advice has been supplied by DAERA and CAFRE,” James concluded.

“It can be easy for farmers to become stressed at this time and this raises questions over mental health.

“From previous experience I know the farming community sticks together and I’ve no doubt that this will happen again.

“For example, if farmers have spare silage they could sell it to their neighbour.”