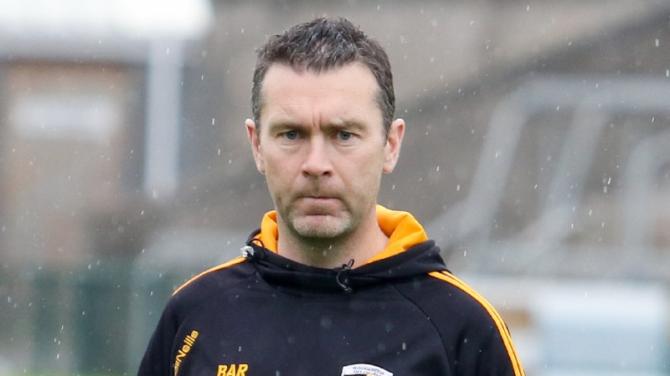 ARMAGH  GAA legend Oisin McConville has labelled it 'shambolic' that the reduction in the maximum stake on fixed odds betting terminals (FOBT) won't be implemented in Northern Ireland due to the political impasse at Stormont.

The former All-Star hailed the UK Government's decision to cut the maximum stake that can be punted on the machines at once from £100 to £2, but branded the current political deadlock in Stormont - which will mean the legislation won't come into effect in Northern Ireland as it will in the rest of the UK- as 'embarrassing.'

The former Crossmaglen Rangers star, who himself had a well-documented battle with gambling addiction, said: “I think it's a brilliant step, first and foremost because it doesn't feel like it's ticking a box this time.

“It doesn't feel as if it's piecemeal, it feels as if it's something with real intent when you consider the amount it's been reduced by. This is something which could have a real tangible effect.

“It's a 98% reduction which is absolutely massive, but I suppose the one thing that would be fairly annoying and embarrassing at this stage is the fact that the North won't be able to implement this.”

The 2002 All-Ireland winner said that failure to broker a deal for Government in Stormont is now having a pronounced and profound impact on the most vulnerable in society.

”It's shambolic and when it comes to stuff like this, that is having a direct effect on people and the most vulnerable people in society. I think it calls for an ultimatum to get people back in and talking because society's hurting as a result of what's going on up in Stormont.

“I'm sure they're sitting up there thinking it's not that crucial but I can tell you that they reckon on the  island of Ireland that there's over 50,000 people who are struggling with compulsive gambling. I can tell you you could double that number and you still wouldn't get close to where we're at in this country with our relationship with gambling.”

Commenting on the knock-on effect that gambling and any form of addiction has on families, the former Crossmaglen Rangers star said: “They reckon that for every person who's in an addiction it effects ten other people, so that's a million people that are affected by gambling.”

Bookmakers William Hill said that the move could wipe out half of their annual profits and would jeopardise up to 20,000 jobs, however, Oisin thinks that such a risk is inconsequential in comparison to the number of lives put at risk through a spiralling gambling addiction.

He said: “To be honest it if does cost a few jobs then that's better than costing lives because gambling addiction has the highest rate of suicide of all the addictions. We're not talking about jobs any more, we're talking about lives.

“In my estimation your life is a lot more important than a job - these people can go and get another job.”

The GAA legend hopes that the new measures are a starting point for further controls and called for more robust online regulation.

“Has it done enough? No. But it's a brilliant start and hopefully it's a catalyst for further change,” he said.

“I suppose the one thing I'd want to make sure happens immediately is that there's nobody under the age of 18 who's able to gamble, so the checks need to be more stringent. If you go online and they ask you 'Are you over 18?' and you answer 'Yes', that shouldn't be enough to enable you to gamble.

“We need to control the amount of money that people are gambling because in this country you can walk into a bookies, or online, and gamble what you want at whatever time you want.

“In countries that have tackled it properly - the likes of Australia – if it's a case of someone coming along and putting £2,000 on a horse, or a dog, or a football team, one of the first things you'll be asked for is identification and where you got the money from.