Flying of flags a reminder of brave SAS operation: Berry 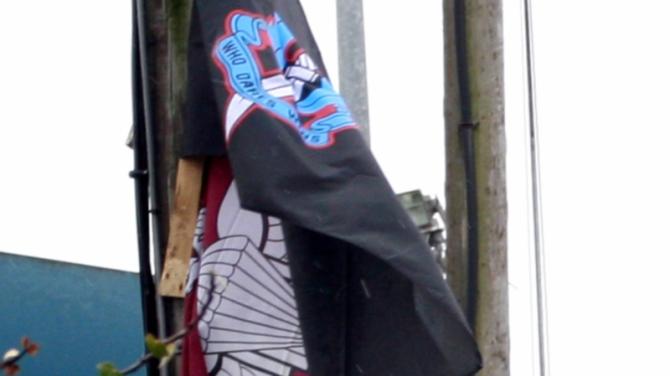 A  local councillor has questioned why a Sinn Fein MP didn’t include condemnation of the Provisional IRA’s attack on Loughgall RUC Station when he spoke out against the flying of British military flags at the scene on the anniversary of the 1987 ambush.

Eight IRA men were shot dead by the SAS as they attacked the village barracks with a bomb in the bucket of a hijacked digger on May 8, 1987. An innocent member of the public, Anthony Hughes also died in the gunfire.

Last week two flags, one an SAS flag and the other a flag of the Parachute Regiment, were flown from a lamp-post opposite the former barracks.

Mairead and Roisin Kelly of the Loughgall Truth and Justice Campaign said all the families of those killed in the ambush - which included their brother Patrick Kelly - had demanded the immediate removal of the "offensive, disrespectful" flags.

The campaigners said they were "a mark of triumphalism" and called for those responsible to be charged with hate crime for the "sustained campaign" against grieving families.

And Newry & Armagh Sinn Fein MP Mickey Brady said: "This shameful act of glorification will only serve to add further distress to the families of the nine men executed and I am calling for the immediate removal of the two flags."

However ABC Councillor, Paul Berry said the flying of the SAS flag at Loughgall was a ‘reminder of the success of the brave SAS operation at Loughgall’

“It is a reminder that this was the day the cowards of the IRA East Tyrone Brigade were eventually stopped in their blood thirsty murderous tracks never to cause so much death and destruction against innocent victims of this local area,” said Mr Berry.

“If the SAS would have been allowed to really take on the PIRA then atrocities such as La Mon, Enniskillen, Teebane, Claudy and many other horrible PIRA murders may well have been avoided and the PIRA totally destroyed.

“The bloody and wicked actions of the PIRA in East Tyrone and across Northern Ireland were more than insensitive and we need to challenge SF/IRAs hypocrisy.

“Micky Brady MP and Sinn Fein have little to do with their time in reporting this, they should condemn the PIRA attack on the station over 30 years ago as the terrorists were intent on killing innocent RUC officers and endangering the lives of local residents.”