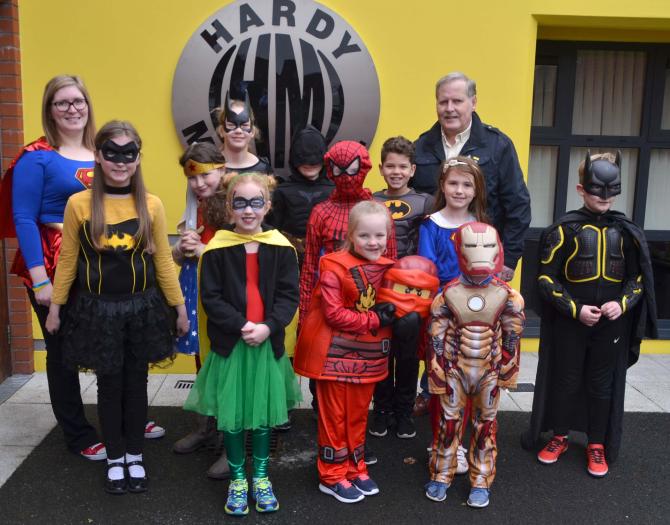 Hardy Memorial held a fundraiser for the Cancer Centre with pupils and staff dressing in yellow or as a superhero. More pictures in next week’s Gazette. KT181614

FORMER Armagh Sports Forum chairman, David Livingstone is a man who is defying all medical odds to be alive today.
Around 22 months ago he was diagnosed with aggressive prostrate cancer and given the bleak prognosis of just six months to live. Yet thanks to a pioneering medical trial, the local man is fighting fit nearly two years later – much to the amazement of his doctors.

It was on May 13, 2016 when David says his life was changed for ever. “After suffering with lower back pain for a week, I went to see my GP on May 12, after an examination and a few tests he sent me to Craigavon Area Hospital,” he recalls.

The following day he underwent a CT scan and a prostrate biopsy, and by that afternoon, he received the devastating news that was to change his life for ever; not only was he suffering from prostrate cancer, but it had spread to his bones and lymph nodes.

The next few weeks were a blur of bone scans, biopsies and blood tests which tragically revealed the progress of the disease through his body. A PSA (Prostate-Specific Antigen test, which determines the level of proteins in the blood that can either be produced by normal – or malignant – cells of the prostrate gland) revealed a level of 3,495 – it is widely regarded in the medical field that a normal level should be zero.

Other prognosis tests at the time did little to bolster hope; a scale to grade the extent of the cancer in his body, known as the Gleason scale, which goes from numbers one to ten (the lower number the less the cancer has spread) David was given a score of nine.

Yet hope was to come when around two months later while receiving radiotherapy treatment, David was asked if he would like to be a participant in a new research programme being run by Queen’s University, with Professor Joe O’Sullivan at the helm, which was supported by the Belfast Cancer Centre. “I had nothing to lose,” he says of the decision. He had already lost “every hair on my body” due to the effects of chemotherapy. Still with all his body was enduring, however, he made sure that he was able to walk his eldest daughter down the aisle at her wedding on October 6, 2016.

That mid-December he started his treatment at the ADRRAD trials, which consisted of 37 grueling sessions of radiotherapy and six months of radium injections. Now nearly two years later, David continues to receive treatment. “I receive hormone injections every 12 weeks, and with medication, things are pretty good. The team at Belfast Cancer Centre are constantly monitoring me,” he reveals.

“With the cancer in my bones, this has had a detrimental effect on my spine, which was damaged in an accident years ago. I have a reasonable quality of life. I will never be cured but with the research being carried out by Queen’s University and other institutions, prostrate cancer may well in the future be eradicated.”

He continues; “Cancer affects people in different ways. For me, I have no energy, I get tired very quickly and find it difficult to walk any distance. Not being able to do things that would have been so simple years ago. But being involved in these trials has extended my life expectancy and for that, I am so grateful.”

His strong faith has also been a source of huge support to him along the way, and to show his deep appreciation to those have helped him with his illness, David – supported by loved ones – is giving back to the Friends of the Cancer Centre. And to help achieve that, a Superhero dress-up fundraiser was held at Hardy Memorial Primary School last week, when pupils had the choice to either don a superhero costume or wear the colour yellow for the day.

David’s also keen to urge men to go to their GP for prostrate checks. Early diagnosis is crucial and can make all the difference in terms of prognosis, he stresses.

Meanwhile, David’s daughter, Victoria also abseiled down Belfast City Hospital at the weekend, all in aid of Friends of the Cancer Centre.

“I have been very lucky to have great family and friends in my life, and to be part of a trial that is helping to eradicate this terrible illness. It means so much to me. I can’t thank enough the research team at Queen’s, led by Professor Joe O’Sullivan, the radiotherapy teams at Belfast Cancer Centre, and all NHS staff who have played a big part of this incredible journey.”