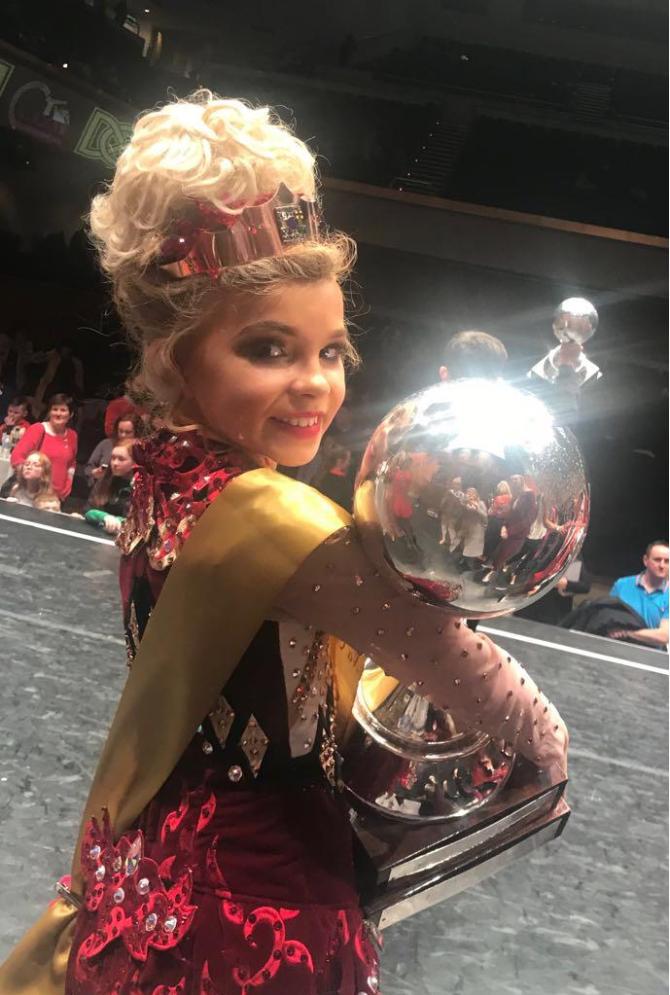 YOU’VE got big dreams. You want fame. Well, fame costs. And right here is where you start paying: in sweat.

It’s the quote from the 80s TV series Fame when a teacher at the fictional New York School of Performing Arts tells her students that if they want to be the best dancers then there is no short-cut to greatness and no substitute for hard work.

And it is a quote which perfectly sums up a South Armagh family’s approach to reaching the pinnicle of the Irish Dancing world.

The hard work is certainly paying off for the Murray family from Cullyhanna as the youngest dancer in the family, Caitlin has just been crowned U11 World Champion at this year’s CLRG championships in Glasgow.

Competing against over 200 competitors who had qualified from their regional heats from all over world, Caitlin emerged as the champion much to the delight of her parents John and Sarah, brother Ciaran and three sisters, Olivia, Eleanor, Lauren.

Caitlin’s siblings weren’t in Glasgow just to cheer their youngest sister to victory instead they too were competing at the world championships.

And Caitlin’s trophy wasn’t the only one heading back home on the Ferry from Glasgow with Olivia and Lauren also making it onto the podium.

Olivia (21), a former pupil at Sacred Heart achieved her highest placement to date with a third place in the World Championship. Incredibly this was Olivia’s seventh podium placing in a row at the championships.

Lauren (18) and a current pupil at Sacred Heart placed fifth in the world to take home trophy number three for the Murray family. This was a massive achievement for Lauren as she was competing in a very tough group and had missed out on being recalled last year.

Ciaran, Olivia and Eleanor were part of the team which was placed fifth in the Senior Ceili Championship making it an unforgettable championship for the Murray family.

To reach this level of excellence takes hard work, dedication and of course as the quote from Fame goes, sweat! But behind this talented family of dancers is a mother and father support team who fullfill roles from taxi driver to mentor as well as run the popular Armagh restaurant, Embers.

With Caitlin training in Derry  at the McConomy Bradley Doherty Academy up to four times per week the role of taxi driver is a particularly demanding one.However Caitlin is in good hands at the academy and the long hours on the road are certainly worth it. Her teachers Rosetta McConomy, Elan Bradley, Danny Doherty and Niamh McGranaghan are no strangers to producing world champions and this year their dancer Caiomhe Devlin retained her fourth world title

“It’s certainly demanding for everyone involved but we are so proud of our son and daughters and everything they have achieved,” said Sarah Murray.

“On top of the trips to Derry they all go to Belfast once per month to have a fitness session with Cathy McAlear. For the rest of the month they work through their individual fitness programmes at home.”

Despite this demanding training schedule the girls refuse to let their school studies slip.

“The discipline they get from the training and competing helps them stay organised and on top of their school work.

“There are times when you ask yourself if all this travelling, two and a half hours to Derry and back up to four times per week, is really worth it. But then you start to realise that they are doing something they are passionate about and as well as getting better at dancing they are learning about discipline, hard work, time management and the sacrifices it takes to reach the top.

“Ultimately the girls want to perform with Riverdance and that is what pushes them on a lot of the time. Olivia is on Riverdance’s flying squad and performs with them at a lot of corporate events. And for the past two summers she has been at the Gaiety Theatre in Dublin performing with Riverdance.”

“We are so proud of them all, Glasgow was certainly a special time for our family but now the focus turns to June for the Irish National Championships.”

The Murray family would like to thank everyone who has helped and supported the girls achieve success at World Championship level.