Anger as illegal fuel pods are dumped along roadside 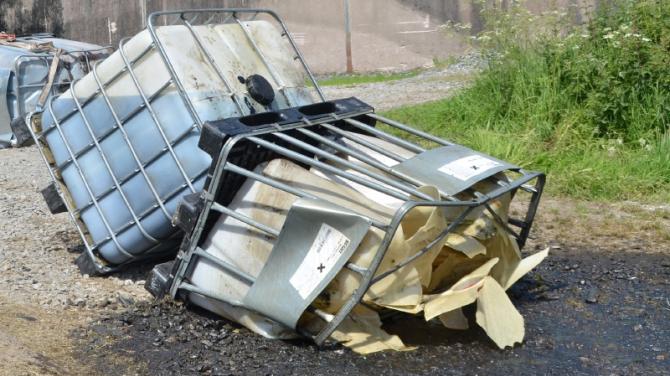 A South Armagh community has been left angered at the latest dumping of toxic waste in the area.

Last week a local resident contacted the Gazette to express their disgust after four fuel pods filled, with what is believed to be, the by-product from the illegal fuel laundering process were dumped along the Upper Darkley Road.

It look as though the pods had been thrown from a moving vehicle and one of them had smashed upon impact spilling its contents along the roadside.

The latest incident has been condemned by local UUP councillor David Taylor who called for a robust approach to tackling the problem in this area. He also called for tougher penalties for anyone caught in the production of illegal fuel.

“There is obvious anger within the local community at this incident of dumping of laundered fuel,” said councillor Taylor.

“It is clear there is an ongoing problem within the South Armagh area in terms of such incidents and this latest act at Upper Darkley Road highlights the severe disregard of the perpetrators of this crime for those living within the local area.

“There are evidently potentially disastrous environmental consequences associated with the dumping of these fuel pods and it is also places significant cost upon taxpayers in terms of removing such items.”

"There is an obvious need for a co-ordinated effort to be initiated between all the relevant legal agencies to stamp out this illegal activity.

"The only way this form of criminal activity will be eradicated is through the full force of the law being prescribed against those individuals committing such crime and appropriate action must be taken by the lawful agencies to ensure that necessary resources are provided in the South Armagh area to stop these acts once and for all."