Family's fundraiser for care home in memory of mother 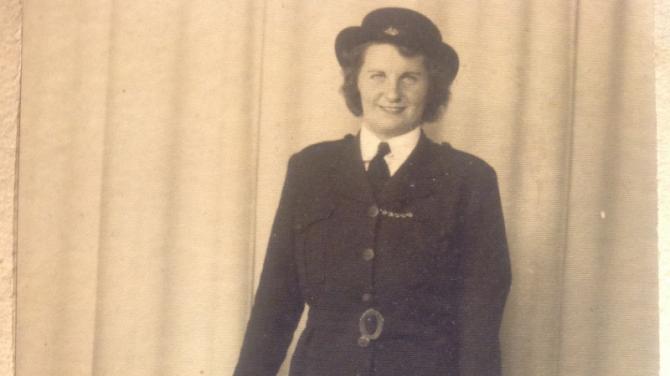 She was the third daughter of James and Mary Jane Carlew and eventually one of six siblings, three boys and three girls.

She attended school from 1929 until 1938 at Clogher National School, Drumhowen, Ballybay, and walked across the fields to school.

May, as she was known to family and friends, helped out on the family farm as well as working in Brady’s Cafe in Ballybay until 1945. She held a lifelong and dear friendship with Joan Brady.

At the end of the war she found work as a Mental Nurse, as they were then known, in Hollywell Hospital, Antrim.

In 1950 she made a career move to become a Prison Warden in Armagh Gaol. Many memories of these vocations were shared with the family, from placing keys in a bowl of water to thwart the sleepwalkers in Hollywell Hospital, to supervising the Borstal girls at Armagh Gaol in cleaning up the horse manure from the Gaol Square, after the horse fairs, for the Gaol’s rhubarb patch, to cutting grass on Joe Fee’s grave using plastic scissors – the first and only time May ever saw plastic scissors.

Coming off duty on Saturday nights at 8pm, May would cycle home to Ballybay for her weekend break, returning on Sunday afternoon to go back onto duty at 8pm – a round trip of 43 miles.

She married William Geary in June 1955 and that brought an end to her prison service, as married ladies were not so engaged in prison work at that time.

She moved to William’s farm at Tullyglush, Darkley, and took up all the duties of farm work, ranging from animal husbandry, calving and birthing sheep, to planting and gathering in potato crops, tending chickens etc, all intensive labouring tasks.

She learned to drive in a column gear shift Austin A45 van and made many trips to marts or checking livestock as far afield as Druncondrath and Virginia, Co Cavan.

Three sons came along, Trevor, Gordon and Ivan, and May saw to their upbringing, schooling, Sunday school and social gatherings.

The home at Tullyglush was always welcoming to one and all and any visitor from doctor to postman always departed with farm or garden produce.

A determinedly hard working and social lady, she was always generous and welcoming, and only allowing herself a few social outings with dear friends in Dorothy Shilliday, Maureen Beattie, Myrtle McKee or Mary Flanigan, kind and generous neighbours.

She saw her sons marry and give her five grandchildren and one great grandson.

Widowed by William’s passing in 2002 she continued living on the family-run farm at Tullyglush and was lovingly cared for by her daughter-in-law, Lesley.

With the onset of Alzheimer’s, and the family’s reluctance, May was eventually moved into Hamilton Court Care Home, Armagh, in May 2014. There she was greatly rewarded by the adoption of a new family, the carers and nursing staff of Hamilton Court. Every one there dearly loved ‘Wee May’ as she was affectionately known.

May hardly ever sat whilst in Hamilton Court, but would walk day and night.

With this in mind and the memory of May cycling from Armagh to Ballybay,Trevor, her oldest son, and the family agreed to organise a sponsored walk in their Mum’s memory, with the proceeds to go towards a Sensory Garden being planned by Danny Dougan, Manager of Hamilton Court.

This walk took place on Saturday, November 3, 2018, with Trevor and Ivan being joined by friends, starting in the Gaol Square at 8.30am and reaching Toam that afternoon at 5pm.

The outcome was £1,450 being presented to Mr Dougan for the Sensory Garden at Hamilton Court early in December.

The Geary Family would sincerely thank everyone who made a donation to such a worthy cause – thank-you one and all.