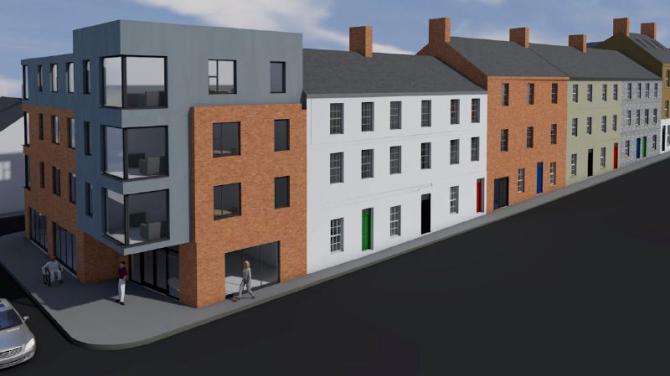 A public consultation takes place on Wednesday (Feb 27 from 6pm until 8pm) in the Armagh City Hotel over a £5 million plan to reinstate Ogle Street back to its former glory.

Plans for the multi-million-pound investment which will create 50 jobs and provide homes for around 60 familes in Armagh city centre were submitted to planners on Friday.

And now the architects behind the scheme have told how they used old photographs of Ogle Street to inform their designs for the new developments.

A collaboration between Ark Housing Association and Armagh-based Ogle Street Developments will, if planning permission is approved, lead to the reinstatement of Ogle Street back to its former glory along with a courtyard development of around 40 social housing units.

The land at Ogle Street has been lying vacant after a number of properties were demolished over 20 years ago. There had been a number proposals put forward for its future use but none of them got off the ground.

Four years ago Ogle Street Developments bought the site and have worked hard to get the plans to this stage.

If the application is approved by planners the developer says he will move on site later this year with the whole project taking two years to complete.

In their design concept da architects said: “The area of the site to the rear of the proposed terrace has been cleared during the demolition of the terraced dwellings to the front. Historically this area would have been the backlands to the Ogle Street terrace and it would have had traditional out-buildings and returns in a random manner but with a very distinct character which we have reflected in the new proposals for the site.

“A key view into this site is the from the Friary Road which has the St Patricks Church of Ireland Cathedral as a backdrop and then there is a varied skyline with a layering effect of stepping roofs, scale, heights down from Castle Street, Chapel Lane and down to Ogle Street and beyond.

“This unique streetscape and historic fabric will be reflected in our design for this site with a healthy variety and rhythm appropriate to this location and will be evident from distant views. However we do not believe that pastiche or imitations of the historic buildings is appropriate within this section of the site, instead we would advocate the construction of modern buildings of high design quality that fit well within their historic surroundings.”

The plans are that the new proposed elevation for Ogle Street will reflect the original in terms of scale, heights, materials, roof pitches, details etc and will be a combination of new apartments, terraced houses and commercial units. Architects have been researching old photos of the street to ensure their modern plans reflect what has gone before.

There are also two buildings (no. 52 and 50) which survived the demolition and as part of the proposal these two buildings are to be refurbished/reinstated as they make a major contribution to the Conservation area in terms of scale, massing and materials.

“It is our belief that developments such as this must make a contribution to the public realm and the outdoor life of the city,” said the a da architects spokesperson.

“Therefore facades should be designed to be active, fronting directly onto public spaces and encouraging social interaction. The building form must be carefully considered and new buildings should strike a discordant note in their size, shape, window or door proportions, facing materials and colour.

“The traditional street pattern in Armagh, particularly that of the city centre, is enclosed building frontages which create a strong urban character. Individual buildings generally have a vertical proportion with narrow frontages and are very rarely more than three storeys high.

“Pitched roofs are the general characteristic however there are some exceptions with more iconic buildings. The concept plan drawing for the new buildings form a courtyard type development which enforces the urban pattern of Armagh and ‘feature’ apartment blocks are at the corners of the site as per Armagh City Centre Masterplan. The new buildings leading up towards Ogle Street will have a stepped profile creating a varied skyline which enhance rather than disrupt the traditional roof scape with the Cathedral dominating in the background.

“Connectivity and accessibility of pedestrian routes, cycle routes and spaces are fundamental qualities that any developments must support. Our proposal includes the creation of a new ‘street’ which will connect the existing council controlled car park to the city centre and create new animated and safe routes for pedestrians.

“Car parking is provided throughout the development with numbers adequate for this city centre location. However this will have to be negotiated with the Department at the planning stage. All car parking is well designed, integral within the development and convenient to the proposed dwellings.”