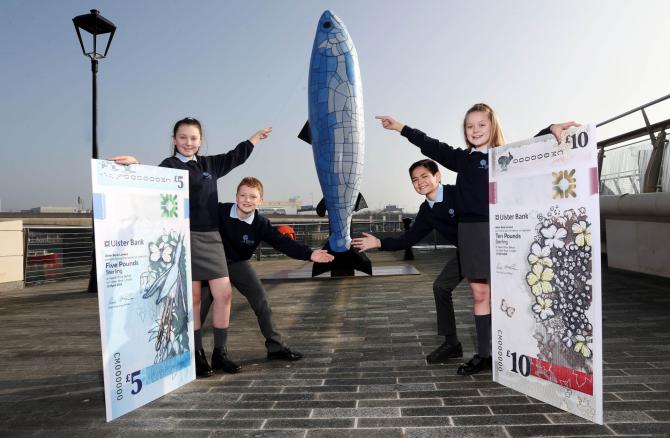 Some of Belfast’s most prominent landmarks are ‘turning vertical’ to mark an important change regarding Northern Ireland bank notes.

Ulster Bank today introduces into circulation the UK and Ireland’s first main-issue ‘vertical’ bank notes, and the bank says consumers, businesses and visitors need to be familiar with the new designs.

It has therefore worked with local school children to give two well-known landmarks a temporary ‘new orientation’ to help raise awareness of the notes and their unique shape.

The Big Fish at Donegall Quay and the large sign at Titanic Belfast are ‘turning vertical’ this morning as part of the initiative, intended to catch the eye of business people, consumers and visitors.

The initiative sees the Big Fish and the Titanic sign this morning accompanied by large vertically-oriented replicas, which have been created by local craftspeople.

The school children involved are pupils of Glenwood Primary School, Belfast – the school supplied imagery to be used on the original Big Fish which was created by artist John Kindness to tell the story of the city. The vertical version, which was created with Belfast artist Eamon Monahan, will become a permanent fixture in the Belfast school.

Terry Robb, Head of Personal Banking, Ulster Bank in Northern Ireland, says: “This is an important change and one that we want to communicate fully to customers. We want people using and accepting the notes to be familiar with the new designs and their unique look, and this is intended to be a fun and creative way to do that.”

Ulster Bank representatives will be on hand from 10am – 2pm today at the Big Fish in order to answer any questions that passersby have about the notes. The bank will also be giving out free tea and coffee in its newly refurbished Belfast City office, as well as providing people with the opportunity to see details about the notes’ design.