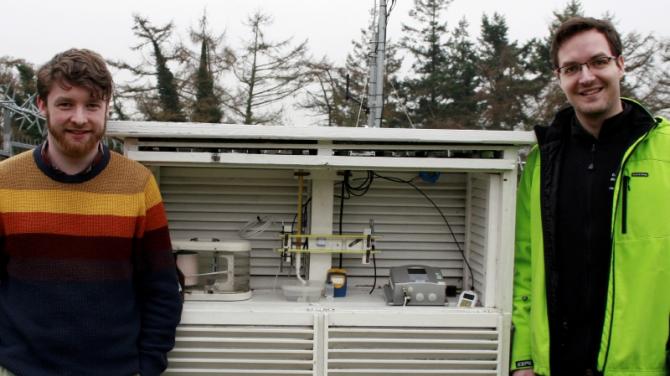 AS snow fell in Greece and Arizona last week Armagh was basking in record breaking temperatures for this time of the year.

Last Tuesday (26th) Armagh Planetarium & Observatory recorded the highest February temperature in the city since records began back in 1844.

A maximum temperature of 17.0 degrees Celsius was recorded which was significantly warmer than the previous high of 15.8 degrees which was recorded on February 13, 1998.

In fact, three of the 10 warmest February days in the Observatory records are from last week. On February 25 the temperature peaked at 14.8 degrees and on February 21 it was 14.5 degrees.

For almost 20 years, Shane Kelly has been taking weather observations at 09:00 every day at the Observatory. However he was on leave when last week’s record-breaking temperature was recorded.

His role was being filled by two PHD students at the Observatory, Rok Nezic from Slovenia and Conor Byrne from Wicklow.

“We help Shane out when we can and it gives us good experience of using the precision measuring equipment,” said Rok.

“We have been at the Observatory now for three years and we enjoy working with Shane when we can.

“Last week’s high temperatures came as a result of high pressure from the south which was blocking out low pressures coming in from the Atlantic and also as a result of the positioning of the jet stream.”

The higher temperatures have led to some people suggesting they are connected to global warming.

“What we can say is there have been episodes of extreme weather occuring more frequently,” said Rok.