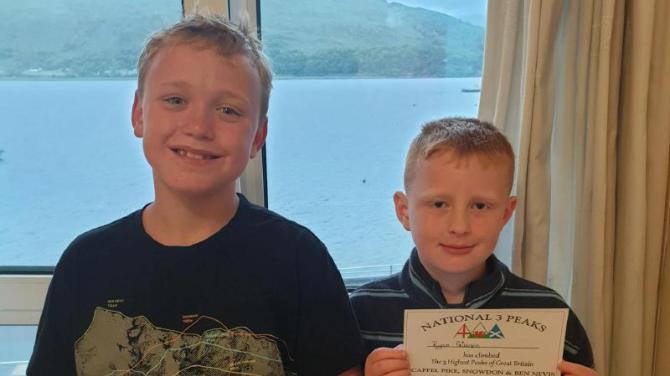 TWO local schoolboys have climbed the highest mountains in the United Kingdom as part of a Three Peak Challenge.

Jai McKinney (10) from Markethill and his good friend, nine-year-old Ryan Gillespie from Armagh, took on the mountain trek at the start of July.

Accompanied by their mothers Carolyn McKinney and Michaella Phillips and Bodhi the mountain dog, all climbed a remarkable distance of 22 miles.

The first of the three challenges was Snowdon in Wales which has a height of 1,085 metres.

Covering a distance of seven miles in 30 degrees heat, all four completed the challenge over a period of five-and-a-half hours.

Next up was Scafell Pike in England which has a height of 978 metres.

It took a similar time of five-and-a-half hours to cover the six miles in temperatures of 35 degrees plus.

At Ben Nevis in Scotland, temperatures were very different, with the group experiencing minus two conditions with snow on top of the mountain.

After seven hours of heavy rain and very cold conditions they finally completed the challenge after covering a distance of nine miles and a height of 1,345 metres.

It took a total of 18 hours to complete all three peaks, and Jai - who is going into P7 at Markethill Primary in September - and Ryan - who will start P6 at the Armstrong Primary - are delighted with their achievements.

The group drove a total of 798 miles from leaving home and Jai’s mother Carolyn McKinney told the Ulster Gazette: “We all found it a challenge but a wonderful experience and a pleasure to enjoy the experience with both our eldest kids. We are very proud of both boys.

“Each mountain was done over the space of three days. There was not much sleep the first night after delays on the boat and a late set off.

“After climbing Snowdon, we arrived at Scaffel Pike at 12pm and pitched our tent and were then up at 6am to hike and drive to Scotland,” she added.