Prime Minister says he 'meant no disrespect to the honourable member... who does not take his seat' 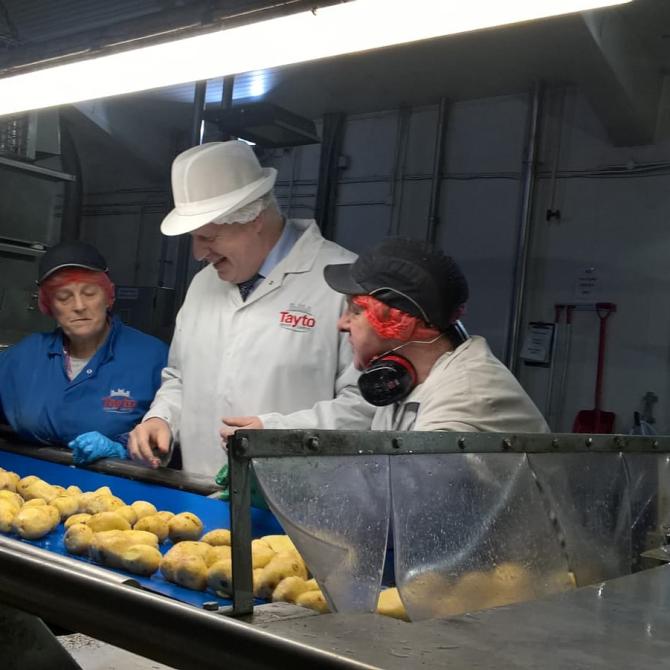 Prime Minister Boris Johnson pictured during his visit to the Tayto factory in Tandragee today (Thursday).

BORIS Johnson has said that he “meant no disrespect to the honourable member... who does not take his seat” after Newry and Armagh MP Mickey Brady claimed the Prime Minister was “attempting to avoid public scrutiny over Brexit with his clandestine visit to the north”.

The Sinn Fein candidate for Newry and Armagh said, “British Prime Minister Boris Johnson sneaked into Tandragee today on an unannounced visit but he can't escape the fact that the majority of people in the north rejected the reckless Tory Brexit.

“I'm sure the business community, the farmers, the agri-food producers, retailers, cross-border workers, young people and many others would have welcomed the opportunity to confront Boris Johnson about the impact of Brexit.

“When I speak to all of these groups they are cannot see anything good from Brexit and are hugely critical of the Tory/DUP agenda. They want to see the protections that have been secured in Europe for our economy, for our peace agreements and to avoid a hard border. And more and more are looking to a way back into the EU through Irish unity.

“While Boris Johnson may want to avoid the people he can't avoid the polls and on December 12 the public will have a chance to have their say.

“Sinn Féin is calling on people to come out and reject the Tories, reject the DUP, reject Brexit, reject Westminster and vote for a better future on the island of Ireland.”

Speaking to the Ulster Gazette during his visit to Tayto Castle, Mr Johnson said that he had been unaware that Mr Brady had not been informed.

It was later clarified by a Conservative party worker that as Westminster is now dissolved there is no obligation on the Prime Minister to inform MPs if he is visiting their constituency.

But Cllr Berry also called on Mr Berry to listen to unionism.

Cllr Berry said, “I recognize and welcome the Prime Minister's visit to the Tayto crisp factory in my home town of Tandragee.

“This has been a very successful family business in the local area for over 60 years and indeed they have been successful in the acquisition of several other UK businesses in recent years so it's great to see Boris Johnson visiting and recognising this company's success.

“However, as a unionist representative locally I would also make it clear that I oppose his Betrayal Act he has negotiated with the EU and the Irish Sea  border in this act.

“I would demand he listens to Unionism in Northern Ireland.”