Curtain up on new season at city's Market Place Theatre 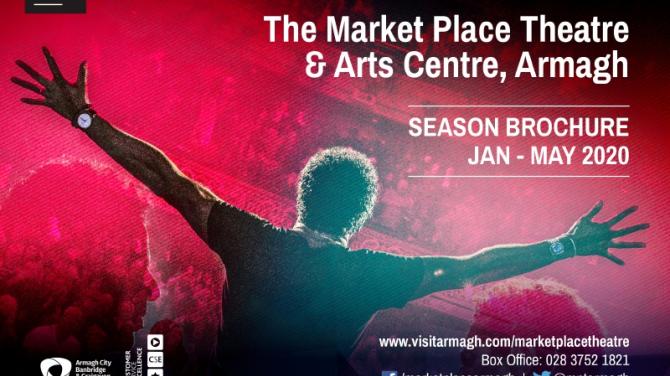 THE Market Place Theatre in Armagh has just released its January to May 2020 season programme, offering theatre-goers the perfect range of Christmas gift ideas, and something to look forward to in the New Year.

Here’s just a glimpse of some of the varied and exciting entertainment on offer...

Ahead of his sold out 2020 show in Belfast’s SSE Arena, Northern Ireland comedy sensation, Paddy Raff, comes to The Market Place on 30 January with his popular brand of stand-up and musical comedy, accompanied by BT9’s most famous export, his alter-ego Nigel. A work-in-progress show that showcases brand new material with some songs and stories from 2019’s hugely popular 'Paddy & Nigel Act Their Postcodes'.

Just in time for Valentine’s Day, ‘The Viennese Strauss Gala’ will recreate the nostalgia and romance of the Viennese Festive season, introducing the audience to a bygone age of glamorous soirees and Strauss waltzes, and comprising highlights from some of the great operettas of Strauss, Kalman and Lehar, including ‘Die Fledermaus’, ‘The Merry Widow’, and many more. The show will feature internationally renowned soprano Megan Llewelyn whose recent roles include Mother Abbess in ‘The Sound of Music’ and Carlotta in the West End production of ‘The Phantom Of The Opera’.

Fans of Lionel Richie are in for a treat on 28 March when the award-winning, five-star production ‘Lionel’ arrives on stage. Following his recent appearances with Lionel Richie himself on ITV’s ‘Sunday Night At The Palladium’ and the ‘Graham Norton Show’ for the BBC, Malcolm Pitt delivers a powerhouse and breath-taking performance in this high octane show celebrating the music of Lionel Richie and the Commodores. Featuring the hit songs ‘Dancing On The Ceiling’, ‘Hello’, ‘Three Times A Lady’, ‘Easy’, ‘All Night Long’ and many more...

Take a journey down memory lane on 4 April with The Doris Day Story, a beautiful expose of the life of Doris Day. With video projection, a swinging jazz band, and impeccable vocals, The Doris Day Story is a compelling musical journey through her life, incorporating some of her greatest songs including ‘Love Me Or Leave Me’, ‘Perhaps, Perhaps, Perhaps’, ‘Pillow Talk’, ‘Black Hills Of Dakota’, and ‘Move Over Darling’, to name a few. This production charts her life from a jazz-singer, to an idol of the Silver Screen.

Back by popular demand on 9 May, ‘One Night With You’ is a feel-good uplifting show, that will take you down memory lane with the hits of three of Rock ‘n’ Roll music’s greatest icons; Buddy Holly, Roy Orbison & Elvis Presley! Featuring all the hits to have you dancing in the aisles, from ‘It Doesn’t Matter Anymore’, ‘I Drove All Night’, ‘Shake, Rattle & Roll’, ‘Teddy Bear’, and ‘That’s All Right Mama’, to name but a few!

Perrier Award nominee Owen O'Neill and Olivier Award winner Guy Masterson combine for a new, hilarious, blackest-of-black comedy, ‘Shaving The Dead’ on 16 May. Undertakers Eurig and Connor depend on death for a living, but even that has let them down. Charles Sterling's burial offers them a lifeline, but will they take it? As they endlessly await the client of the corpse, they ruminate on love, death and the meaning of life. A multiple Five Star hit at the 2019 Edinburgh Fringe!

Details of all events can be found online at www.visitarmagh.com/marketplace
theatre, and tickets can be booked by contacting the Box Office on [028] 3752 1821.