'Ample opportunity' for Armagh's case to be made at the Assembly 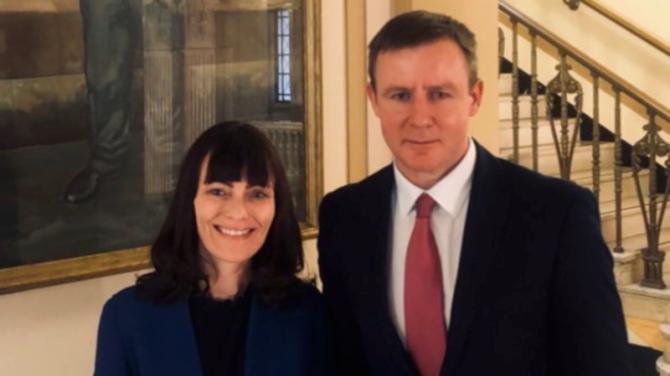 ONE of Newry and Armagh’s MLAs says there will be “ample opportunity” to put forward the case for improvements to Armagh’s infrastructure now that the Assembly is up and running.

With Stormont sitting regularly for the first time in three years, political observers are watching and waiting to see what comes of the ‘New Decade, New Approach’ document which was produced by the British and Irish Governments.

While the publication promises lots of presents, such as a high-speed rail service from Belfast and Dublin and progression on the Narrow Water Bridge project outside Newry, Armagh does not seem to get a look-in.

Residents here might have been forgiven for thinking that the proposed link roads in the city might have been one of those projects to get a mention. In fact, in over 60 pages, the word ‘Armagh’ features just once, in reference to the council and its part in a growth deal.

They were also asked if there were any other projects in this area which should be made a priority by the new Executive.

The DUP’s William Irwin said that patience will be the watchword for Armagh.

“Given the useful role that Stormont has played when fully functioning in the past, we have seen at those times big steps forward in road network projects and I expect the same type of progress moving forward now, especially given Boris Johnson’s commitment to a so-called ‘infrastructure revolution’.

“There will be ample opportunity in the days ahead to explore infrastructure projects locally and I will do what I can to put the case forward for Newry & Armagh.”

The SDLP’s Justin McNulty hailed the appointment of his party’s Deputy Leader as Infrastructure Minister as a signal of how important his party believes investment in our ailing infrastructure is to our economy and local communities.

Describing Ms Mallon as “a shining light in politics here”, he said: “She is an outstanding public representative – she is strong, determined and an extremely hard worker.

“I know she will bring the work ethic she has displayed in her role as Councillor, Lord Mayor of Belfast, Assembly Member for North Belfast and SDLP Deputy Leader to her role as Minister for Infrastructure.

“Nichola is keen to hit the ground running and whilst the Department covers a large policy area, she has already identified key priorities like the planning application for Casement Park, the delivery of the Narrow Water Bridge Project, road projects like the Derry to Dublin and the Belfast to Derry Road along with investment in rail infrastructure and the connection between Belfast and Dublin.

“These projects are ‘regionally significant’ but they have a real impact on Newry and Armagh, especially the issue of an hourly Enterprise Rail Service between Belfast and Dublin.

“However, there are other issues in the Ministerial in-tray which I will continue to support such as the Southern Relief Road in Newry, the expansion of Greenways and the link roads around Armagh City.”

He said the agreement sets out an ambitious plan for government, public services and infrastructure.

“It’s important the ambitions set out in that plan are delivered and it’s also important that there is a regional balance in the investment planned,” he added.

“The Assembly covers the whole of the North. It’s therefore important that the entire region gets fair and balanced investment or, another way of putting it is that there are many communities who live beyond Belfast.”

Meanwhile, Sinn Fein’s Armagh-based MLA, Cathal Boylan, has written to Ms Mallon for an update on infrastructure projects within the constituency.

“Significant investment in infrastructure is required right across the north.

“In the Armagh region we need to see the advancement of the Armagh North & West Link and the Armagh East Link Roads. I believe that both projects are crucial, not only to ease traffic congestion and reduce air pollution in Armagh City, but to enable the city and district to grow and attract employment.

“We also need to see the progression of the Southern Relief Road, which has been promised significant funding from the Belfast Region City Deal.

“I have submitted a written question to the new Minister for Infrastructure requesting an update on these projects and will be asking for them to be prioritised within the new Regional Strategic Transportation Network plan that is currently being prepared.

“Other means to reduce congestion must also be prioritised as well. This includes investing in active travel infrastructure like bike lanes and walking paths, as well as improving our public transport services and decarbonising our transport network.

Armagh is a beautiful area. Let’s keep it that way by striving towards sustainability.”

What would you like to see the Assembly deliver for Armagh? Email your suggestions to editor@ ulstergazette.co.uk