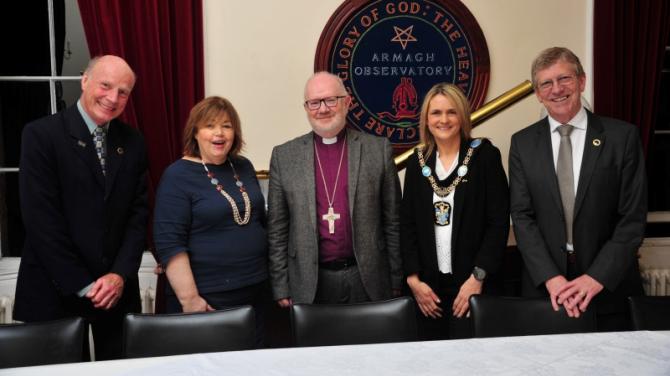 THE Archbishop of Armagh and Primate of All Ireland, the Most Revd Richard Clarke has described Armagh Observatory and Planetarium and indeed the city itself as a wonderful and truly unique place.

A special reception took place at the Observatory on Thursday, January 9 to mark Archbishop Clarke’s upcoming retirement and to pay tribute to his service as Chairman of AOP’s Board of Governors.

Speaking at the event, Archbishop Clarke said: “There is so much about Armagh that is wonderful. We have a wonderful Observatory and Planetarium, a wonderful library, two beautiful cathedrals and museums and of course, the Navan Centre.”

However, he said more must be done to ‘join the dots’ between these facilities to showcase Armagh as a place of huge cultural significance.

“Armagh being the Ecclesiastical capital of Ireland means something to a lot of people. This place has a heritage and tradition.

“As Archbishop I hope the link between the Cathedral and Observatory continues and not just in a sentimental way.”

That link stretches back to 1790 when the Observatory was built by the then Archbishop of Armagh, Richard Robinson. There have been 105 Church of Ireland Archbishops in Armagh since then, but the last 18 have all taken their position as Chairman of AOP’s Board of Governors.

The Armagh Observatory is the oldest scientific institution in Northern Ireland and the longest continuously operating astronomical research institute in the United Kingdom and Ireland.

The Armagh Planetarium was founded in 1968 by Dr Eric Lindsay, the seventh Director of the Armagh Observatory. It is the oldest operating Planetarium in the UK and Ireland, celebrating 50 years in operation on May 1, 2018 as the public face of space and astronomy in Northern Ireland.

Now unified as a single organisation, the Armagh Observatory and Planetarium (AOP) delivers internationally-recognised research in astronomy and related sciences and vibrant educational and outreach programmes for all ages.

Speaking at the special reception for Archbishop Clarke, Chair of AOP’s Management Committee, John Briggs said: “It is clear every Archbishop brings something different to the role of having responsibility for the Observatory.

“It is also clear that Archbishop Clarke has taken his role of overseeing the Observatory and Planetarium very seriously.”

Mr Briggs pointed to the Archbishop’s ‘skill and leadership’ during the merger between the Observatory and Planetarium – a scientific organisation coming together with a public facing commercial enterprise.

“Archbishop Clarke also oversaw the appointment of our first ever Chief Executive and Director, Dr Michael Burton. It was so important that we got the right person and this has been proved to be the case.

“He has also been instrumental in developing the relationship between ourselves and the Department For Communities, our departmental funders. This relationship has developed into a real trusting partnership.

“I believe Archbishop Clarke’s legacy will be his tone of leadership and I hope that tone lasts for the lifespan of AOP. He always found the right words, in the right way to the right people at the right time.”

Archbishop Clarke retires on February 2 after seven years as the Church of Ireland’s most senior cleric.

He said: “I have loved my seven years in Armagh and I am so grateful to so many people for their friendship, loyalty and sheer fun.

“The Observatory and Planetarium is a wonderful place and one that should be maintained.

“The motto, ‘the heavens declare the glory of God’, as I’ve said before, should not be read as, “the heavens prove the existence of God.” But if one has faith then the heavens show the glory and beauty of God.

“I want to thank you all for my experience in Armagh. So much in Armagh is wonderful – this place is unique, not only on this island, but it is unique as a place.”

Speaking on behalf of the Department of Communities, Meave Walls said: “My small team has already infected me with the wonder of this place (AOP). At a time when the Government is moving towards the language of partnership over accountability, here is an organisation that is already doing that. An organisation that means what it says and values our partnership.”

Armagh City Banbridge and Craigavon Borough Council, Lord Mayor, Mealla Campbell said Archbishop Clarke was a wonderful ambassador for Armagh and will be certainly missed when he retires next month.

“I want to wish Archbishop Clarke well in his retirement. He has always been very supportive of Armagh’s rich heritage and of the work we do in council.”

The Lord Mayor also paid tribute to the work at AOP during a momentous 2019.

“I want to say congratulations on a wonderful year. I think 2019 marked a real turning point for the Observatory and Planetarium with the celebrations around the 50th anniversary of the Apollo Moon Landings.

“Huge credit goes to the staff and board as their hard work has given everyone a real lift and helped generate a renewed interest in the Observatory and Planetarium, not just locally but also on a wider scale.

“This interest is underpinned by the passion and drive the staff and board has for this piece of heritage here in Armagh, and it is important that we foster and grow this wider interest.

“The wealth and range of events last year drew the community in and brought people together. It shows just what great potential there is for the Observatory and Planetarium going forward and I have no doubt that its ambitious plans will soon be realised.”

AOP Director, Professor Michael Burton, took the opportunity at the reception to outline the ambitious future plans to secure the long-term sustainability and growth of the organisation.