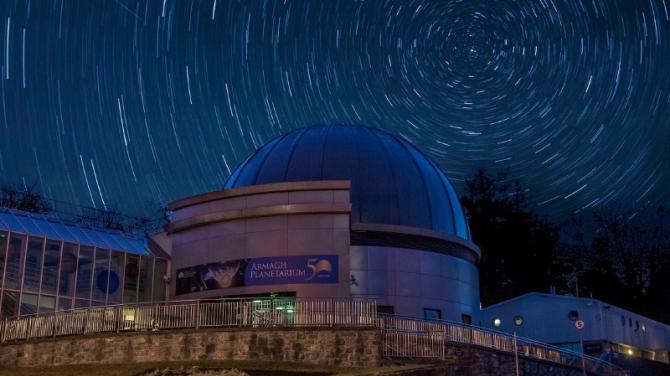 ARMAGH is encouraged to celebrate the science of you, the universe and everything in-between as it plays host to the sixth annual NI Science festival.

Earlier this month the festival announced its programme, which boasts over 270 events taking place over 11 days in February (13-23) across Northern Ireland, with a selection of events scheduled to take place at the Armagh Planetarium and AmmA Centre.

A programme of events is to be hosted at the Armagh Planetarium, including its Star Tracker Evening (February 14) which includes a digital theatre show, astronomy talk and dome show; The Sound of Space (February 22), hosted by Tomasz Rozek; Agriculture in Space (February 22), exploring the challenges to growing food in the unwelcoming environments of the Moon and Mars; and explore the Planetarium in detail in the Glimpse into the Armagh Observatory (February 17) and Explore Dome Show Launch (February 17) events.

Other events include Comet 101 Workshops (February 20), to learn all about Comets; and Ask an Astronomer (February 21), where visitors have the chance to ask those burning questions about the wonders of the universe and seek advice about telescopes and stargazing at home.

Meanwhile, at the AmmA Centre, events includes Green Screen the Science Way (February 13), a fun-filled course where young people can experiment with green screen technology to bring the beauty of science to life; The Science of Art (February 18), where young scientists can have fun with colour, shape and space to ignite creativity and imagination through science-themed art activities; Coding in Space (February 18), an introductory workshop to introduce teens to video game development using gravity as the game mechanic; and Exploring in Soundwaves (February 20), a workshop investigating how we interpret the world around us through sounds through practical experiments.

Chris McCreery, NI Science Festival Director, said: “Six years on from the very first edition of the NI Science Festival and the now annual celebration of all things science, technology, engineering and mathematics has grown to become one of the largest of its kind in Europe.

“As the festival grows, so too does the calibre of events and talent we’re able to attract to Northern Ireland. It also acts as a platform to showcase the inspiring natural beauty and ecology on our doorstep plus the truly global reach of scientific research and innovations hailing from NI.”

He added: “This year, we’re delighted to extend the reach of the festival to Armagh. Through close collaboration with our regional venues and event partners, plus the continued support of our funders, the festival is working to engage with the largest possible audience by championing STEM in all its forms.”

For more information about NI Science Festival events and to book tickets, visit nisciencefestival.com and keep up to date with the festival on social media via Facebook and Twitter.