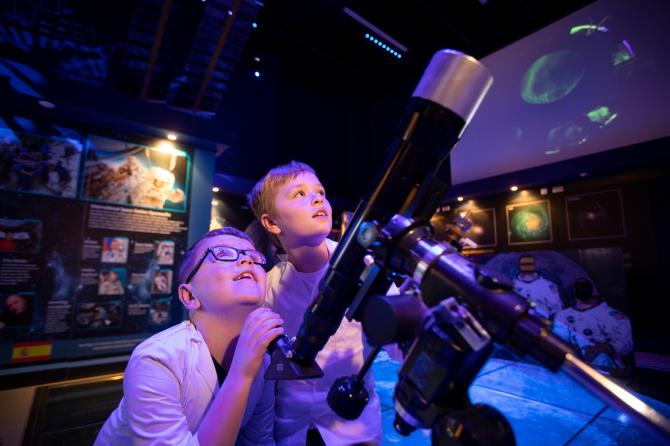 ARMAGH Observatory and Planetarium has launched an online programme of special screenings this May, with awe-inspiring films narrated by well-known voices such as Benedict Cumberbatch, Brent Spiner and Richard Dormer.

The digital screenings encompass award-winning immersive shows, CGI science, spacecrafts, solar systems, supervolcanoes and much more. The programmes will be available to watch on the Armagh Planetarium and Observatory Facebook on the following dates:

Robotic Explorers, Wednesday 6th May at 6pm, Narrated by Brent Spiner
Near the end of the twentieth century, we began launching unmanned probes into the far reaches of the solar system.

What they discovered was amazing and, in some cases, unexpected. Now after dozens of probes have been deployed, the exploration continues. New space missions are underway, and many of these robust spacecrafts are still operational, beaming their knowledge back to Earth every day.

Armagh Planetarium and Observatory will pay tribute to these robots who have explored in our stead and experience what they have taught us about our solar system. Narrated by Brent Spiner (Data of TV's Star Trek: The Next Generation).

Supervolcanoes, Wednesday 13th May at 6pm, Narrated by Benedict Cumberbatch
The scene was 74,000 years ago, on the island of Sumatra. A volcanic eruption triggered the sudden and violent collapse of a vast regional plateau. Toba, as the volcano is known today, was the largest volcanic eruption in the last 25 million years.

But Earth has seen far larger. 250 million years ago, an eruption in what’s now Siberia lasted a million years and was probably responsible for the greatest episode of mass extinction in Earth’s history.

The award-winning Supervolcanoes looks back at rare classes of eruptions that have marshalled the energy that lurks, like a sleeping dragon, beneath the surface of planet Earth. The program moves beyond Earth to explore the impact of giant volcanic eruptions around our solar system. Audiences will fly down to Neptune’s frigid moon Triton, and onto the ultimate volcanic world: Jupiter’s moon Io. On a visit to a legendary North American hot spot, Yellowstone National Park, the film asks: can a supervolcano erupt in our time? Trailer available to watch here: https://www.youtube.com/watch?v=JadQfs7iQGo

Birth of Planet Earth, Wednesday 20th May at 6pm, Narrated by Richard Dormer
Birth of Planet Earth tells the twisted tale of our planet’s origins. Scientists now believe that our galaxy is filled with solar systems, including up to a billion planets roughly the size of our own. The film employs advanced, data-driven, cinematic-quality visualisations to explore some of the greatest questions in science today: How did Earth become a living planet in the wake of our solar system’s violent birth? What does its history tell us about our chances of finding other worlds that are truly Earth-like?

To enjoy the screenings, follow Armagh Observatory and Planetarium on Facebook. For a full programme of events once the centre has re-opened visit www.armagh.space