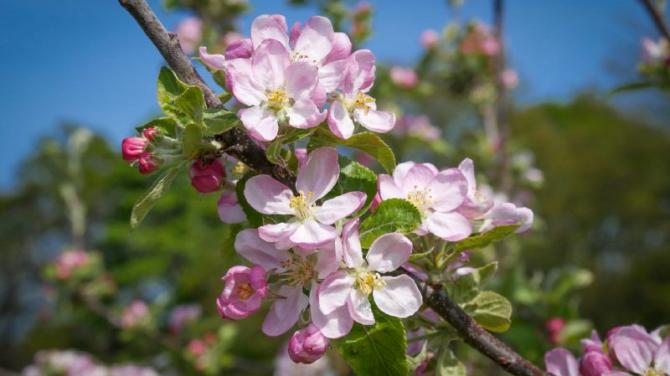 COUNTY Armagh is known as the Orchard of Ireland because of the many apple orchards that span over 4,000 acres of countryside.

The Orchard County of Armagh, with Ardress House at its heart, is widely known for its apple growing tradition.

The orchard at Ardress dates back to the 1700s with the commercial Bramley apple being added much later. Today an estimated 5,000 apple trees are managed by tenant farmers Sam and Greg MacNeice who use the fruit to produce award-winning Mac Ivors Cider. The MacNeice family were tenants of the Ensor family since the 1940s and continued their tenancy when the National Trust took ownership of Ardress House estate back in 1959.

In addition to the commercial orchard, Ardress also has a smaller collection of heritage trees featuring a selection of traditional eating and cooking apple varieties. These trees are believed to be over 80 years old and the orchard is currently being restored, in a project that will hopefully bear fruit in the next year or two.

The land at Ardress is ideal for apple growing with a heavy loam soil on clay and a high nutrient holding capacity which is essential for success, but weather also has a role to play.

Traditionally in May the orchards at Ardress burst into stunning pink and white blossom, but this year the flower has appeared a couple of weeks earlier than usual.

As Greg reveals: “We have had the earliest blossom in a long time due to the mild winter. Climate change means that winters are getting milder and wetter in County Armagh (as elsewhere in the British Isles) so our spring growth in the apple trees also gets going earlier.

“Unfortunately, we are still susceptible to spring frosts, and these can do real damage to early apple blossom. We had only a half crop last year due to cold weather at blossom time and we have been hit again this year.”

Weeks of continuous sunshine and very little rain have helped the development of a heavy bloom. Now it’s up to the Very Important Pollinators (VIPs) such as honeybees, bumblebees, flies, beetles and wasps to do their job and cross pollinate the blossom to produce fruit.

Wild crab apples have a blossom that is white and very delicate while Bramley, the dominant apple at Ardress, has a more robust blossom with lots of pink, changing to white after pollination.

The Ardress apple blossom is quite a spectacle and one that is traditionally celebrated by thousands of people during ‘Apple Blossom Sunday family fun days’ in May when the apple is celebrated in its many forms with apple pressing, apple pancakes, apple pie and of course cider all available to taste and buy.

This May, Ardress House and its orchards will remain closed to the public as the Trust follows government guidance around travel restrictions and social distancing, but the conservation charity has been sharing pictures and video of this spring spectacle on its social media channels to ensure people don’t miss out on this much loved moment.

#BlossomWatch encourages people to enjoy blooming trees they can see from their windows, in their gardens or on their daily permitted walk, and share their best images on social media using the hashtag.

The move is part of the Trust’s campaign to help people of all ages to become more connected with everyday nature.

The charity said that blossom sweeping the country is one of nature’s key moments that could help lift the spirits during these uncertain times and enable people to celebrate nature and history together.

As the blossom at Ardress makes its annual appearance, Greg recalls his own memory of this special event: “We are surrounded by a sea of colour and the fantastic smell of the blossom, together with the sound of the bees buzzing as they do their work. This is the promise of new growth and a new crop of apples. It is a very special time and every year for as long as I can remember our family has always had to pose for the annual apple blossom photograph. The blossom is our symbol of hope.”