Stephen does 500,000 steps in a month to support hospice service 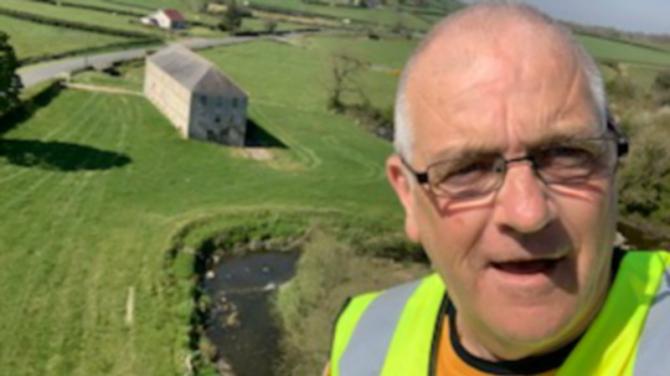 A LOCAL man has set about raising much needed funds for the Southern Area Hospice by walking 500,000 steps in a month.

Stephen McCleary - who finishes his challenge this week - is no stranger to fundraising for this worthy cause, having raised thousands of pounds over recent years.

In previous years, Stephen, his wife Patricia and a group of close friends would have walked sections of the Camino de Santiago pilgrimage trail in aid of the Newry-based facility, which is extremely close to his heart.

Just last year, as part of their fundraising effort, the group undertook longer treks, which included a 120 mile route through parts of Cambodia.

However, as a result of the coronavirus outbreak this year, Stephen - who has also been volunteering with the Armagh COVID-19 Response Committee over recent weeks - had to come up with a novel way to raise funds as the hospice struggles without their usual fundraising events.

And, in order to do this he set about doing an Irish Camino, which involved walking around country roads all around Armagh City and as far out as Ballymacnab, Markethill, Derrynoose and Killylea.

“The hospice is struggling and it takes £7,000 a day to keep it open,” Stephen told the Gazette.

“I know they got a grant of a million pounds there from the government but that is not going to last long.

“The annual district collections in early April would have lifted up to £30,000 and the Dublin, London and Belfast Marathons were missed and they are always a massive fundraiser for them.

“The hospice depends on those events as a third of their money comes from people like myself fundraising so everything has been cancelled and that just stopped.”

Before heading to the Sherry’s Field Recreation Centre each morning to help those members of the community most in need, the kind-hearted city man has been completing his challenge on an early morning basis.

With his 500,000th step due to be completed this week, Stephen is extremely grateful to everyone who has helped him to raise over £4,000 so far.

“I had two fantastic donations of £1,000 each from two very good friends and it literally took off from there,” he said.

“It’s early morning and you have no bother walking 500,000 steps in a month when you are out walking every day.

“I do my early morning walk before I come down to Sherry’s to volunteer for the COVID-19 group.

“I love getting out walking and it’s a good way of clearing your head.

“I’ve been all over the county and I had a lovely wee walk at daybreak on Tuesday up past Orangefield and out on to the Ballynahonemore Road and back in the Newry Road and Folly Glen.

“I have walked every part of Armagh and it’s a great way of finding out where you are.

“I started doing this in 2015 and have raised a serious amount of money between then and now.

“My wife started getting involved about three years ago so myself and the wife and a group of close friends had already started collecting for the Camino this year, not knowing this was going to come.

“We had done street collections in Keady in early February and lifted a couple of thousand. Every year we would have raised at least £10,000 if not more.”

Behind Stephen’s fundraising efforts is a personal story as to why the hospice holds such an important part in his life.

“I started doing it after my dad died and I wanted to do something for people with cancer so I contacted the hospice one day and it just went from there.

“I had a few close friends who had been under the care of staff at the hospice before they passed away, and the love and attention both they and their families received was so important at such a stressful time.

“As a volunteer for the hospice, I have seen at first hand how important this support is to patients and their families.

“My father passed away from cancer in 2014 in my home town of Monaghan and it was hard to watch him suffer, so I decided to raise money to support those living with this terrible disease, and I have been doing it on an annual basis ever since.

“When people see me coming they know I am usually going to bone them for a donation,” he laughs.

Donations have been steadily coming in on a daily basis from people supporting Stephen on his Irish Camino.

As donations keep coming in, Stephen’s good friend Patricia Gartland - who helps with most of his street collections - has decided to get her head shaved next week to try and add to his fund. She will be setting up a dedicated Facebook page to raise funds through the link.

l Anyone who would like to donate to Stephen’s fundraiser should visit https://www.justgiving.com/fundraising/Stephen-Mc-cleary2