Delivering a taste of Texas in Markethill 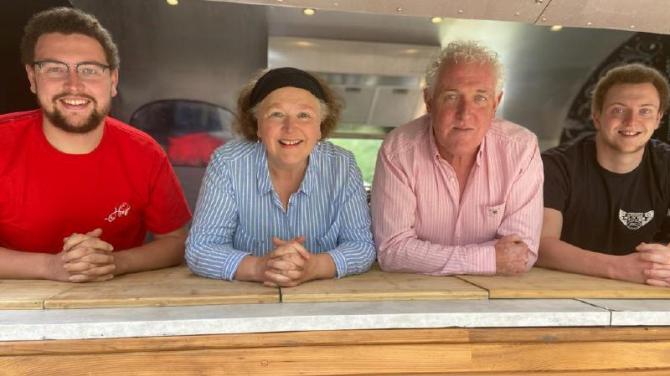 WHETHER it’s been pints delivered to our front doors or restaurants offering take-away services, Northern Ireland’s food and drink lovers have been well catered for during the COVID-19 pandemic.

But one corner of County Armagh has been enjoying the taste of Texan-style barbecue as a family business fights back from the devastating effects of the lockdown.

On The Hoof BBQ in Markethill has completely changed its business model to not only prevent the street food business facing an uncertain future, but also provide their community with some of the finest BBQ food anywhere in Ireland.

The Chapman family, Niall and Fiona with sons, Conor and Rory, launched their business back in 2015 when they bought a vintage double-decker London bus and used it to host drinks receptions at weddings and corporate hospitality events. The natural progression was to then offer hot food at these events and On The Hoof BBQ was born.

A World War II water tank once used to tackle airfield blazes which had been on the family farm for generations was transformed into an offset smoker allowing the family to smoke meats including brisket, ribs and artisan sausage. To achieve an authentic taste the Chapmans travelled to Austin, Texas to learn from world-renowned Pit Master, Aaron Franklin and with Gill Mellor from River Cottage.

“We wanted to make sure the food we served was of the highest quality,” said Fiona.

“In the early days there was a lot of trial and error, but we are confident we have mastered these techniques – from choosing the right wood to create the smoke to using the best rubs for the meats.”

To serve their food, the Chapmans needed a suitable vehicle to match their Texan BBQ style of food. Their online search took them back to the United States for another piece of Americana – an Air Stream caravan. They bought it unseen, found a man willing to tow the caravan from Cape Cod to New York where it was put on a ship bound for Southampton and from there loaded on to a lorry and driven to Northern Ireland.

From 2017 On The Hoof BBQ took to the road and mainly pitched up at markets in Dublin such as Eastpoint, Spencer Dock, Mespil Road, UCD, and Sandyford, as well as a number of events across Northern Ireland.

The bulk of their business had been in and around Dublin but when the COVID-19 pandemic struck, On The Hoof saw their business disappear literally overnight.

“The HSE contacted us on Wednesday to say we weren’t allowed to trade from the Thursday. This was such a shock and I have to say I grieved at the start as we had a lot of very loyal American customers down in Dublin.

“It all happened so quickly – we had our stock bought for the week ahead and we ended up losing most of it.”

With no financial help available from the government, the micro-business really was in a time of crisis, but it has been the family’s determination to adapt which has seen them turn their fortunes around.

Rory said: “We had the idea of working from home and it took us around three weeks to have everything set up and in place to begin serving food to the local community.

“We had been so used to preparing food which was being consumed almost immediately, now we had to think of how customers could come to us and how we could deliver.

“We launched an online platform to allow customers to place orders and pay for their food and we launched a local delivery service. We had to think through social distancing issues and ensuring the food arrived with our customers in the best condition. There was certainly a lot to consider.”

The response from the Markethill community has been very positive and as On The Hoof BBQ prepares for week five working from home, they are already looking to the future.

Fiona said: “The response from our customers has been fabulous, everyone has been so kind and we are very thankful for it. We want to develop and have ideas for our own range of sauces and rubs as well as future plans for Supper Clubs and cooking with fire days when society returns to normality.”