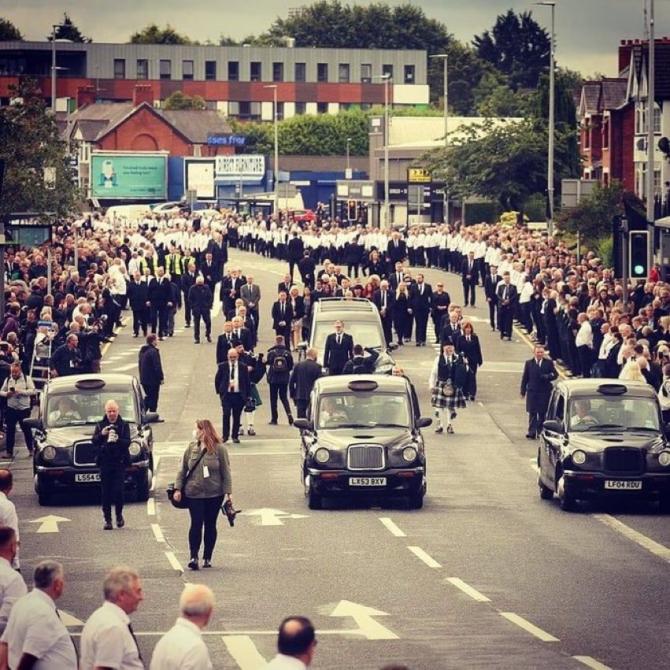 Hundreds of people lined the streets of West Belfast for the funeral. Current coronavirus regulations state a maximum of 30 people are allowed to gather together outdoors.

The Newry and Armagh DUP representative said that it was “a totally irresponsible and shocking decision to have such a large number of people congregating on the streets given the current restrictions.”

He added, “It is an absolute scandal that senior Sinn Fein members including Michelle O’Neill took to the streets in this funeral, where hundreds of people lined the route and showed such a blatant disregard for the thousands of people across the Province who have diligently followed the Coronavirus movement restrictions.”

He concluded, “There is no excuse for the Deputy First Minister in this instance, this was a massive error and one that she should be held fully accountable for. Sinn Fein, with this ridiculous public spectacle, have dealt a savage blow to months of discipline by the wider public and I unreservedly condemn their actions.

“The wider public are furious about this and rightly so, people have avoided meeting as family groupings and indeed have buried loved ones with only a small number of people present to respect the virus protections in place. The scenes at this funeral, in contrast, are an absolute disgrace.”

All of the other parties which make up the Executive along with Sinn Féin - the DUP, UUP, SDLP and Alliance - have criticised Ms O'Neill, with the UUP and Alliance calling for her to resign.

Speaking to the Executive Committee at Stormont today (Wednesday), Ms O'Neill said: "I am satisfied that my actions are within the regulations and the public health guidance. My actions I stand over.

"I think it is unfortunate that a lot of the charges being levelled towards me are political point-scoring, as opposed to actually being about the rules."

The Sinn Féin vice-president added that she would encourage "anybody to stick within the regulations and the guidance as we have set out.

"We are not out of the woods yet."