'Landlocked' crumbling Richhill wall should be set back: Speers 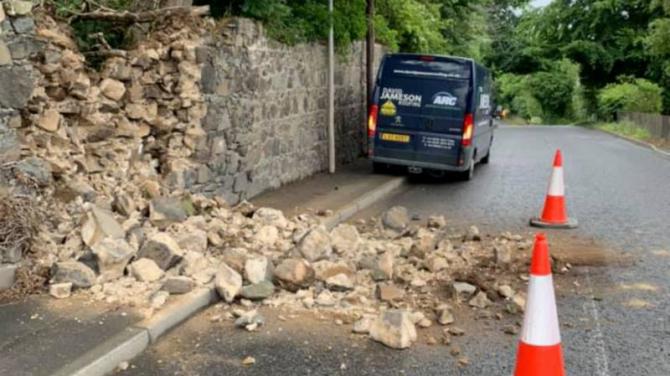 IMPROVEMENTS need to be made in the Legacorry Road area of Richhill in order to make it safer for pedestrians.

That's according to Alderman Jim Speers, who was speaking after a stone wall crumbled last weekend onto a narrow footpath.

Around 50 years ago there were plans for a bypass in Richhill, however, in the 1980s those plans were abandoned.

Instead, the Legacorry Road was to be realigned and the stretch of the demesne wall would have been replaced and a wider footpath created.

When a housing development was being created a strip of land was left for the realignment, however, as the realignment did not take place and as a result, the wall has been “landlocked”.

Alderman Speers says that this has led to years of decay.

“As a consequence of the wall being landlocked there's trees, bramble and ivy behind it which have been unattended and unmanaged,” said the Ulster Unionist councillor.

“Therefore this has obviously caused the wall to crumble. We are lucky that we are not talking about someone being injured as a result of the wall coming down.

“DfI have a responsibility to act in this particular case. This is a problem which was originally called by the first two decisions, namely to have a plan and then abandon that same plan.

“It has been an ongoing problem, it has been suffering as the result of years of decay. This is a major blight on the landscape as anyone who approaches Richhill knows.

Alderman Speers believes that DfI should take the opportunity to make amendments in the area.

He added, “The footpath on the Legacorry Road is very narrow. I believe the DoE should carry out some footpath improvements and set the wall back.

“That would provide some extra safety to pedestrians and hopefully this can be done soon, as members of the public are having to go out onto the road to get around the crumbled remains of the wall.”

A spokesperson for DfI said that their Emergency Response attended a call out to a collapsed wall on the Legacorry Road which was obstructing the carriageway and posing a danger to road users.

“The material was cleared from the road to the footway and the location was signed and coned to reduce the danger to road users,” they added.

“The wall is not owned by DfI but is in private ownership and the responsibility for repairs and the maintenance of the wall lies with the private landowner.

“The incident has also been passed to Armagh, Banbridge and Craigavon Borough Council who have responsibility for dangerous structures.”