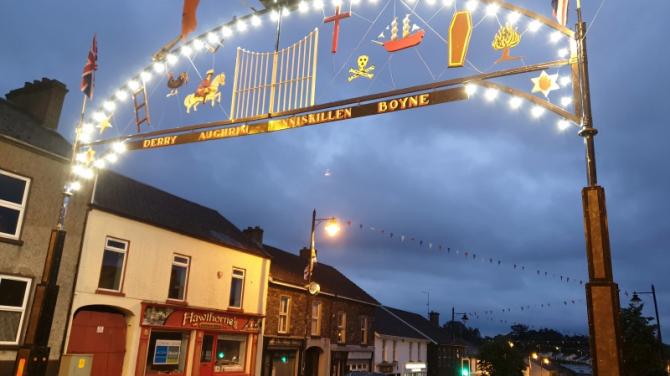 DESPITE local Twelfth of July processions being cancelled, Markethill District Loyal Orange Lodge No 10 were determined that this year the 'Twelfth' atmosphere would as always be a well entrenched fixture of the town.

Its impressive illuminated Orange Arch has been erected as normal, as have several thousands of metres of bunting crossing its main streets, but a new initiative was also launched.

Under the 'Fly Your Flag 2020' banner, the District distributed not-for-profit flag packs containing a Union or Orange Standard flag, 10 metres of bunting, and a selection of children's hand waving flags. Optional extras included either sill or wall mounted flag holders.

Just under 1,000 flyers promoting the offer were circulated across Markethill, Mountnorris, Glenanne, Loughilly, Mullabrack and surrounding areas, with the opportunity also taken to distribute explanatory leaflets on the history, make-up and activities of local Orangeism.

The District’s popular social media presence on Facebook was also utilised for promotion.

The response to the flag packs was phenomenal, exceeding all expectations.

One of the project facilitators, Quincey Dougan, told the Gazette of the scale of the uptake.

He said, “Initially it was believed that perhaps a few dozen packs might be purchased, but when we closed the order book it was in the hundreds!

“An incredible two miles of bunting has been handed out, with the vast majority being in Markethill town.

“It demonstrates the depth of feeling and support locally for Orange heritage and culture, and is without doubt something that Markethill District Orange Lodge will build on in the future.”

Despite no procession, District 10 will be hosting a drive-in service on July 12 in substitution for its several annual Orange services. The service will be officiated by the Rev. Nigel Reid, and held in the Markethill 'Twelfth' field, located at the Parr's Lane junction with the Mowhan Road.

It will start promptly at 3.30pm, however cars are advised to come early to ensure marshals can optimally organise vehicle parking.

In line with public safety and social distancing guidelines, people are asked not to leave their vehicles, and it should be noted that no toilet facilities will be available.

All Brethren are encouraged to wear regalia, and there will be musical interludes provided by Mullabrack Accordion and Kirsten McMullen.