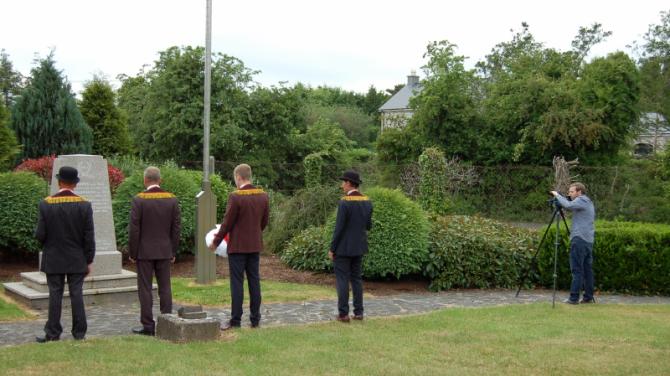 ORGANISERS of the Scarva Sham Fight have come up with a novel way to mark this year’s ‘Thirteenth’ after the event was cancelled due to coronavirus.

They have produced an hour-long video which will be broadcast online next week, allowing people to enjoy the sights and sounds of the Sham Fight in the comfort of their own home.

The annual clash between King William and King James – together with the large-scale procession of bands and Royal Black Institution members through Scarva village – attracts crowds of upwards of 100,000 people.

However, due to the coronavirus pandemic, the Royal Black Institution cancelled all meetings, services and processions throughout the summer – including Scarva, which this year was due to be held on July 14.

The Sham Fight organisers whole-heartedly supported the decision in the interests of public health, but they were determined not to let the day pass without commemorating the occasion in some way.

And so the Scarva-based preceptory which organises the huge event, Sir Knight Alfred Buller Memorial RBP 1000, has been busy in recent weeks working on a 60-minute film which will be broadcast online at 11.15am on Tuesday, July 14 – the exact moment the parade was due to get under way.

Andrew Boyce, Worshipful Master of RBP 1000, said: “As soon as it became clear there would be no Sham Fight this year, we started coming up with ideas as to how we might mark the day, without the possibility of breaching any coronavirus restrictions.

“We settled on the idea of putting together a film which will encompass many of the features of the traditional Thirteenth celebrations – plus a few interesting extra segments.”

With the technical assistance of Bessbrook-based Sideline Films, Sir Knight Boyce and his team produced the hour-long programme, which includes a religious message from Imperial Grand Chaplain Rev Nigel Reid, historical features on Scarva and the Sham Fight, and highlights of last year’s parade.

Members of RBP 1000 have been filmed laying a wreath at the village war memorial to local members of the security forces murdered during the Troubles, while mezzo-soprano Emma Brown has specially recorded a number of hymns.

And, of course, viewers will get to cheer as footage is shown from a previous Sham Fight in which – as always - King William emerges victorious over his old foe, King James.

“The coronavirus pandemic has brought pain and despair to many households. Our thoughts and prayers are with all those who have lost loved ones, and we pay tribute to all those NHS heroes and other key workers who have been fighting on the frontline against this horrible disease.

“Although there is much sadness in the community, we hope our film will bring a little bit of cheer to our friends and supporters.

“The suits may not need dry cleaned or the seats left out on the Twelfth night this year, but I would still encourage people to watch our video in their own homes - and hopefully in 2021 we will see you in Scarva!"

John Adair, a member of the Sham Fight organising committee, and who plays King William each year in the thrilling re-enactment, said: “It’s been strange not planning a Sham Fight this year.

“The cancellation has left a huge void in our own lives – we enjoy the craic and camaraderie that goes along with all the preparation, and, of course, the big day itself.

“But we understand why the event had to be cancelled. Perhaps it’s a good thing because I believe King James was doing some extra training in the New Year!”

Sovereign Grand Master of the Royal Black Institution, Rev William Anderson, who also features in the video, said: “This is a wonderful initiative by the Sham Fight organisers and they are to be commended for their forward-thinking approach to a difficult situation.

“I know many people feel great sadness that there is no Scarva this year, but we have to remain vigilant in the fight against coronavirus, and hopefully we’ll return to Scarva next year when the celebrations will no doubt be bigger and better than ever.”

The Sham Fight organisers are acutely aware that there are many charities which will miss out on fundraising in Scarva this year. A charity which is close to their hearts is St John Ambulance, which provides medical cover at the Sham Fight each year. The organisers have set up a Just Giving page allowing people to donate online in aid of St John Ambulance, which can be found at www.justgiving.com/crowdfunding/royal-thirteenth-1?utm
_term=x4rze28VE.

The Scarva Sham Fight video will be broadcast on the Royal Black Institution’s Facebook page and YouTube channel, and the Royal 13th Facebook page, on July 14 at 11.15am.