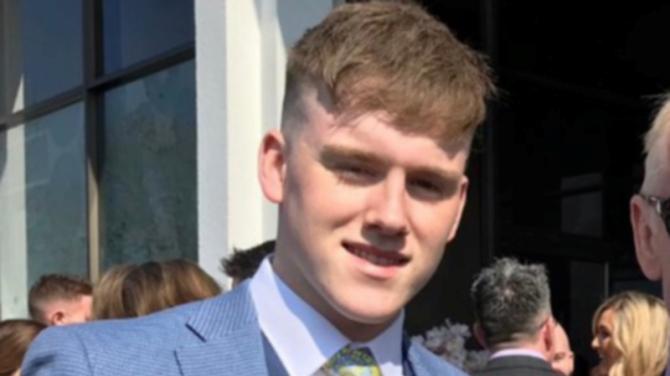 A BESSBROOK teenager has scooped £1,750 on the Lotto with a £2 tip from a stranger following a good Samaritan deed.

Daithi Corr (19), a construction student at Liverpool’s John Moore University, won the lucky Lotto windfall after he went to the assistance of an overburdened elderly lady at the local recycling centre.

With the COVID-19 lockdown cutting his university course short, lady luck would appear to have been on the 19-year-old’s side as the Liverpool supporter also celebrated his team’s 19th league title win this year.

The money bonus has come at a time when most people have been negatively affected by the COVID lockdown financially, though with one more number the south Armagh man could have been rolling in a share of £4 million, however he still says the five number win put a great smile on his face.

“I was at a recycling centre helping an old lady with her bags of rubbish. She set £2 on the skip and told me to buy a lotto ticket,” explained Daithi.

"I took it and put it into my pocket and then when I was going to the gym later on that day, I made sure that I bought a lottery ticket with that £2.

“I got the ticket on the Thursday for the Saturday Lotto (July 25) at Hughes in Camlough and that’s where I cashed it as well. It was just a lucky dip, that’s all I ever really do,” he added.

Thinking no more of it, the former Eoghan Ruadh Dungannon and Tyrone GAA man ‘hurled’ the ticket into his wallet and awaited the following Saturday night’s draw.

“I didn’t look at the ticket at all, I actually forgot about it for a while,” explained the Lotto winner.

“I remembered when I was just sitting in my room and then I scanned it through with the app on my phone, and found out I had won the money with five numbers,” explained the Lotto winner.

“It didn’t cross my mind that I was close to winning the jackpot at all, but it’s bitter sweet I suppose because obviously I’ve won the money, but one more number and my life would’ve been changed forever as well as the whole family,” he added.

The lucky dip Lotto win will now go towards a dream backpacking trip abroad, much sought after by the university student once the borders go up post-lockdown, thanks to his unknown benefactor.

“I wouldn’t have considered myself at all lucky before this. It’s the first thing that I’ve ever won or has really gone my way.

“I’ve put some away for helping with university and the rest is going to savings for travelling south east Asia next year.

“I suppose I would just be really thankful to the woman at the recycling centre, because it’s definitely a big help and takes a lot of stress off me for university and savings.

“I suppose it shows a bit of good karma for once and you don’t see that too often,” added the Bessbrook teen.

Clocks go back this weekend