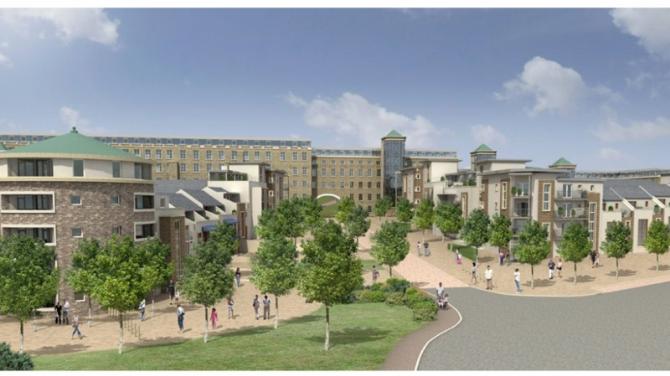 RESIDENTS of Bessbrook have expressed their concern over the latest proposed housing development, plus shops, in their ‘model village’.

Having seen the plans, they are opposed to what they described as “yet another case of Bessbrook’s famous industrial heritage being airbrushed out of existence.”

If the planners get the thumbs up to the development proposed by a Keady-based contractor, another tangible chunk of Bessbrook’s proud past will disappear.

Those plans include construction of 276 dwellings and shops. Were that to proceed, it would see the demolition of the once world-famous Bessbrook Mill’s weaver sheds, along with the highly ornate columns which supported the roof.

The so-called ‘blast wall’ – a remarkable structure devised and erected by the Army to protect soldiers and military helicopters from mortar attack during the Troubles – would also be demolished.

Another famous wall – the one on the Derrymore Road –would also be consigned to the list of ‘past features’ in the event of the proposals getting the go-ahead. That distinctive wall is almost 200 years old.

One worried resident told us, “We don’t mind well thought out projects, but we see this as just another example of something that makes no allowance for Bessbrook’s past, its place in history or the iconic buildings which, for generations, have stood here and gave this place its identity.

“We’d be very happy to see a new venture that recognised those things, but we aren’t willing to just stand by and watch these landmarks bulldozed – literally – out of existence.”

Another local said, “I think it would be an absolute shame if we were to allow anybody to do what is being suggested. Bessbrook has a unique history, so to propose that a big part of it is just razed to the ground isn’t on. No, we can’t allow that.

She continued, “The world’s first Damask machine was developed here and, because of that, Bessbrook became known the world over as the home of the world’s finest linen and silk.”

Her husband added, “Developers these days just seem to be able to do what they like. But that’s not right, is it? For a wee village in County Armagh to have achieved what this place did really is quite remarkable, so rather than flattening all of this, they should be developing it as a tourist attraction.

“That’s something Newry Council should think about, because this place’s recorded history stretches back to the 16th century, so there’s all sorts of potential here. There was a tram service here, for example, so why couldn’t something be made of that? Why not have coffee house in a converted tram? There’s an idea for them to work on.

“I just think they’d be well advised to go away and do a wee bit of research about what went on here in the past. They could learn from likes of the Nicholsons, the Pollocks and the Richardsons who were real visionaries in Bessbrook’s development.

“People here aren’t against progress,” he added. “But what we are opposed to is destruction that simply ignores things that are important to others, places no value on anything from the past and shows no respect or regard for the environment or anybody who suggests that their [the planners’] way of doing things might just be wrong.

“We saw that in the past when they came up with the idea of a housing estate on the Fort Field where there was a standing stone that had been there for more than 1,000 years. ”

When asked if there are plans to launch a petition or mount an appeal against the proposed planning application, we were told, “Yes, but at the moment, with social distancing and all of that, it isn’t easy to organise meetings for groups of people.”

The Ulster Gazette contacted Genesis Planning Consultants for a comment on the matter but at the time of going to press they had not responded.