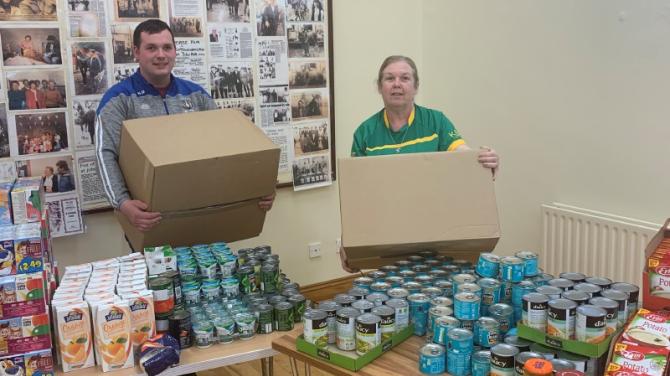 COMMUNITY volunteers in Newtownhamilton are continuing to assist young families by distributing food parcels in the area to ‘alleviate any holiday hunger’.

Despite the Department for Communities food parcel scheme finishing on July 31, Newtownhamilton Community Association decided to continue assisting those experiencing difficulties as a result of the coronavirus pandemic.

In particular the group has decided to target young families living in the area and Newtownhamilton Community Association secretary, Niall Murray said the deliveries have been greatly accepted by all the recipients.

“We have a lot of young families in the area and we have some families that are already registered at the centre through maybe summer schemes or other events that we have held, so we have a bank of families,” Mr Murray said.

“Between last week and the week before we have received a £2,000 delivery of toiletries and groceries, so we will be continuing to make deliveries until it runs out.

“We are committed to supporting young families. We will be adhering to criteria set out so as to reach families who, perhaps, have not received support before. Some of these families may still be on furlough or indeed made redundant so any help is gratefully received.

“Our aim is to alleviate financial pressure so they can use money, which may have been spent on food, on something else.”

Since March, the kind hearted group of volunteers have been assisting their local community by helping with food parcel deliveries around the Newtownhamilton area.

“We meet two to three times a week and we then process any requests and then get them delivered,” explained Mr Murray.

“A lot of volunteers have gone back to work so we have a core group of five or six volunteers who are overseeing it now because our numbers are reduced.

“The council scheme was very successful and we delivered 1,500 parcels approximately, between March and the end of July. Anybody who was shielding at the final stage of the scheme got a food parcel delivered.

“The high number of food parcels going out in this area corresponds with the figures on the deprivation scale.

“We are taking maybe a two week break at the end of August to give our volunteers a break because it has been intense for this past five/six months.”

Members of the community who are eligible will also be able to avail of a fresh food voucher scheme which the community association has got behind in a bid to support both families and local businesses in the town.

“It can be spent in either of the two butchers in the town, so we have supported 20 families already with the voucher scheme,” Mr Murray revealed.

“You contact somebody from the community association and if you are eligible we will post a voucher out.

“We are supporting families and it’s a support also for local businesses.

“We have also put together stationery packs for young children who are returning to school.

“The packs include pens, pencils, a wee activity, toothpaste and a jar or tub of 100ml hand sanitiser just as a gesture to lift the spirit of our young people. And, we are also in the process of putting together activity packs for older people.

“We are hoping there is not going to be a second lockdown because where we are in Newtown, it would be very challenging for our volunteers if there was any bad weather in terms of snow as we are always hit hard.”

In a further welcome boost recently, Newtownhamilton Community Association was awarded £14,700 funding from the Department for Communities to keep the community centre running.

“This was awarded to cover the costs of our oil, heating and cleaning supplies, all of our unavoidable costs, because we have lost our income from people renting the centre.

“We have been in the community centre day and night over the last few months.