Armagh to Portadown railway project is on the right track 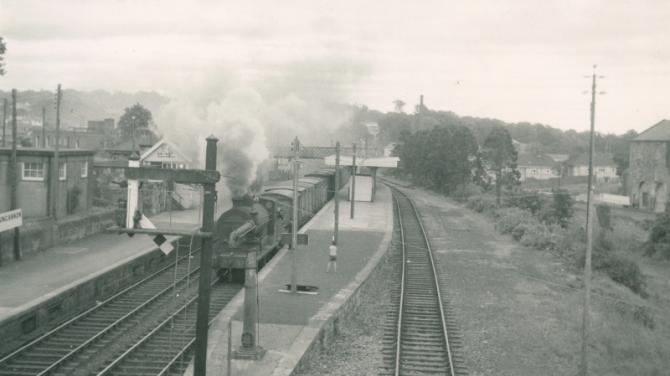 HOPES of restoring a railway line between Armagh and Portadown have been given a boost, with both Armagh City, Banbridge and Craigavon Borough Council and the Infrastructure Minister keen to see the project advanced.

At a meeting of Council’s economic development and regeneration committee, members agreed to share the findings of a scoping study on the viability of railway line connecting Armagh and Portadown with the Department of Infrastructure.

And, speaking to the Local Democracy Reporting Service after the meeting, Infrastructure Minister Nichola Mallon confirmed her Department would be prepared to “largely” fund a Council-managed feasibility study for the project

A council working group has been considering the feasibility and viability of re-opening the Armagh City to Portadown railway line that has been closed since 1957.

A scoping study was undertaken to formulate the concept of what a rail service between the two locations would look like and identify realistic parameters for the preparation of a feasibility study.

It recommends that any future feasibility study should consider the extension of existing rail services from Portadown through Armagh City only and assume a passenger only service.

It is estimated the feasibility study could exceed £100,000 in costs while the capital cost associated with the infrastructure project is likely to exceed £100 million.

Speaking about the report, Alderman Jim Speers said the project had his full support and called for officers to progress matters promptly.

He also explained he was of the understanding that the Infrastructure Minister is receptive to the idea.

“It is my understanding the Minister has indicated she would fund part of this study and I understand a letter from the Minister regarding this matter is in Council’s hands at this time,” said the Ulster Unionist representative.

“I fully support this proposal and thank the officers who have worked on it, but I think we need to be slightly more ambitious, time could be of the essence here.

“I think, personally speaking, we should be moving to get the study going tonight and I am a bit disappointed we are not.

Council’s strategic director of place, Olga Murtagh, said it was important to recognise the work to date on this project and said it would be vital to identify how much the Department is willing to spend on the project

“In discussions with the Department we can ascertain the level of investment they would be prepared to put into the feasibility study and the time frame around that,” said Ms Murtagh.

Sinn Fein councillor Garath Keating welcomed the report and said it was critical that Council maintains the momentum for the project.

“The scoping study points towards this project being very much doable,” said Cllr Keating.

“It would be a game changer in terms of the economic outlook for this borough and we need to strike while the iron is hot.

“Hopefully we can secure a commitment from the Department that if the feasibility study is completed they will take funding seriously.”

SDLP group leader, Councillor Thomas O’Hanlon, said he was delighted there are “positive vibes” around the project from the Department.

Before the discussion on the matter was brought to a close Alderman Speers was able to squeeze in another proposal, despite the committee Chair, Councillor Brian Pope’s efforts to move the meeting on.

Alderman Speers proposed the issue is brought back to December’s committee meeting for an update and this proposal was seconded by Councillor Nicholson.

Speaking to the Local Democracy Reporting Service after the meeting, the Infrastructure Minister confirmed she is keen to see the feasibility study completed and would provide the vast majority of the funding for it.

“My priority as Minister is to work on transport infrastructure that improves people’s lives, connect communities and tackles the climate emergency, prioritising active and sustainable transport options,” said Minister Mallon.

“I believe that rail has huge untapped potential to deliver multiple benefits across our island.

“Armagh City, Banbridge and Craigavon Borough Council has undertaken a high level scoping study which I understand considers what might be included in a future feasibility study.

“I would like to see this further developed and the feasibility study undertaken.”

The Minister continued: “I have therefore asked my officials to pursue this with the Council and they are seeking confirmation that the Council wish to progress this to the next stage and would procure and manage the development of the feasibility study.

“The funding for the Council’s feasibility study would largely be provided by my Department, with Council providing only a part share.”