Planning permission for apartments could hinge on the impact on parking 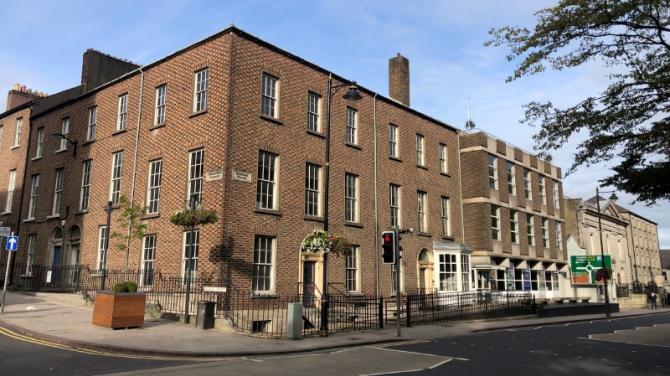 A DEVELOPMENT proposal lodged with Armagh City, Banbridge and Craigavon Borough Council’s planners could, if approved, result in 19 apartments being built in the heart of Armagh.

Submitted by Crawsfordsburn-based Ballymullan Architect Ltd, on behalf of applicant Tregaron Properties Ltd, the plan is to convert offices at 22 Russell Street and numbers 1 and 2 Gosford Place into 19 apartments with associated alterations and extensions.

But with the proposed site including land to the rear of the famed Mall Presbyterian Church, it is feared that if the current plans were to be given the go-ahead in their current form, that could create parking problems for members of the 250 families-strong congregation.

It is a situation of which Mall Trustees’ chairman, Mr Malcolm Dawson, is well aware. And he has made it plain that such issues must be resolved to the satisfaction of those affected.

Recalling a previous not dissimilar incident, he told the Gazette, “There were to have been apartments at the junction of Mall East and Victoria Street and one of the reasons for turning down the proposed number of apartments was that they had to provide parking for those. I’m assuming that the same considerations would apply in this case, too.

“To be perfectly honest with you, the building as it stands – the old health offices – is terrible. I have seen the artist’s impression of what proposed apartments would look like and I am happy to the extent that they [the developers] are intent on preserving the building at the end of Russell Street; that frontage is not going to change.

“And while they’d be doing something fairly modernistic on the other building, it couldn’t look worse than it does at the minute. It’s an eyesore – one of the typical 1960s buildings and I include in those the flats at the end of Barrack Street! Let’s just say that planning permission back then was a lot more lax than it is now.”

Then referring directly to the possibility of misgivings members of Mall Presbyterian Church may have, Mr Dawson advised, “If they have any sort of concerns, I’d like to think they would make those known and have their case heard.”

The proposal is to provide a total of 23 car parking spaces allocated to the 19 apartments. In addition to creating those new car parking spaces, the application is seeking approval for demolition and associated site works, railing, path and communal area, demolition of a fire escape, and a concrete framed circular staircase and lit core on rear elevation, along with an extension to provide a new lift lobby.

Currently the proposed plot is occupied by a concrete-framed building that once formed part of a garden complex associated with the Mall Presbyterian Church.

A design access statement submitted with the application notes stated that the site has undergone ‘various alterations which reflect the economic and political changes in Northern Ireland’.

PRONI documents relating to the site’s history also reveal that between 1850 and 1855 a bank foreclosed on a Mr McKinstry’s attempts to create ‘a prestigious residential development that was never fully realised’.

Another fact highlighted is that the building suffered significant blast damage following an IRA car bomb attack on the courthouse during the Troubles. The subsequent repair work was extensive and expensive in that it involved major structural stabilisation which included the incorporation of a steel frame inside the Georgian building.

At the time the building was occupied by the Health and Social Care Trust to which the Mall Trustees’ chairman referred.

And he is not alone in having had serious reservations about it, for according to the design access statement issued by Ballymullan Architect Ltd, on behalf of applicant Tregaron Properties Ltd, the H&SCT was guilty of installing generic flush doors and basic finishes that ‘do not reflect the period detailing originally exhibited’.

The same design access statement describes the proposed apartments as being ideally located for young couples and the overall development as one resulting in ‘a prestigious private ownership scheme which reflects the original concept for the Mall’.

The application will be advertised until Friday, December 11.