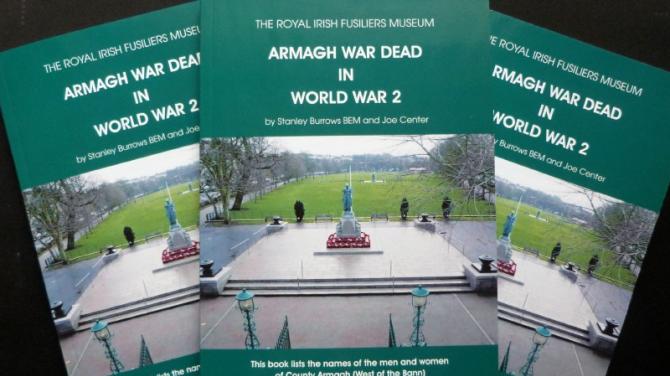 A BOOK honouring the memory of Armagh servicemen and women who sacrificed their lives in the Second World War has just been published.

The just-published and now-available second book is a by-product of the exhaustive research carried out for Armagh’s War Memorial project which culminated in the names of the city’s war dead finally being displayed on the War Memorial at the courthouse end of The Mall.

Co-author Stanley Burrows told The Gazette, “It took somewhere between a year-and-a-half to two years to write. It’s hard work, but when we were standing at the War Memorial in The Mall on November 11 – Armistice Day itself - and the names finally were on it, one moment in particular made it all worthwhile.

“A woman, who had a couple of others with her, was standing near the World War II memorial. She was in tears and I was panicking that we might have failed to include a name.

“But when I went over and spoke to her, she told me her tears were because her father’s name was there and they were a Roman Catholic family. That really touched me.

“I’m an Armachian all my life so I know a fair few people from here. I’ve mixed with both sides of the community, so when I was doing research for this I found a lot of family names that I knew.”

He also discovered a lot of things he had never known previously, one example of this being revealed when he explains, “I knew a man who lived in Vicar’s Hill and I couldn’t figure out why he only had the one arm.

“I learned that he’d lost his arm in World War I, so all of this gave me an education as to who was who and what had happened in certain Armagh families.”

Stanley tells another poignant story of a gentleman who used to call at his family’s home daily.

“He lived across the road and he visited my father every day – and I and my siblings never knew his son had been killed in World War II. I only found that out when we were doing our research,” he says.

“Joe extracted newspaper cuttings from the Gazette and Guardian that had been in the Irish Studies Library, so the names of people I knew kept cropping up. If I’d heard some of the stories previously, then I’d either forgotten them or hadn’t been listening properly!” he admits.

The city’s War Memorial bears 120 names of World War II dead, but the book includes quite a few more.

Stanley explains, “It covers ‘County Armagh west of the Bann’, so it goes right down to Bessbrook, Crossmaglen, Poyntzpass and up round the Newtown area. But for the actual War Memorial, we restricted ourselves to the Armagh District.

“The Portadown War Memorial has the names of a fair number from the Annaghmore/Loughgall area that we would class as being from Armagh. And there’s actually one from Tirnascobe that’s on the Portadown Memorial.

“There’s a fair few from Charlemont on the Moy War Memorial. And those from Bessbrook and Tandragee appear on their respective Memorials, so we didn’t include them on the Armagh War Memorial because they are already remembered elsewhere.”

He reveals that in actual fact, gleaning information about Armagh’s Great War victims had been considerably easier in that there had been censuses in 1901 and 1911 just prior to the eruption of the 1914/18 conflagration with such a horrific loss of life.

“But with the World War II names, if you hadn’t have had the newspaper cuttings you’d have been falling far short,” Stanley says. “Those cuttings were invaluable, but even with them there’s no doubt about it that researching the Second War was a far tougher job.”

With a total of over 500 names now on Armagh’s War Memorial, Stanley reckons he checked each one of those at least three times. Name, date, rank, Service details, correct spelling. Rigorous, time-consuming, concentration-demanding stuff.

But worth it? “Oh yes,” he replies. “And with the book, thankfully Ted Trimble was very patient with us, because every time you read it you found another mistake”.

Acknowledging the contribution of his research colleague and co-writer, Stanley says, “Although his health was suffering, Joe – who sadly isn’t well now – still did a lot of work. This book and the names on the War Memorial wouldn’t have happened without his involvement.

“We must not forget The Royal Irish Fusiliers Museum Curator, Caroline Corvan who was also a driving force in the project and researcher Jonathan Maguire for his information on Armagh Royal School old boys.”

‘Armagh War Dead in World War 2’ is available from the Royal Irish Fusiliers Museum. While - due to the pandemic - the museum currently is closed, copies can be ordered online at www.royalirishfusiliersmuseum.com or contact the curator at fusiliersmuseum@yahoo.co.uk or 02837522911 for postal or collection by appointment.

NICHOLA DALY: Knock-on impact of COVID will be felt on businesses for a long time