The 'blind leading the lame' as Stevey takes on his latest challenge with a broken leg! 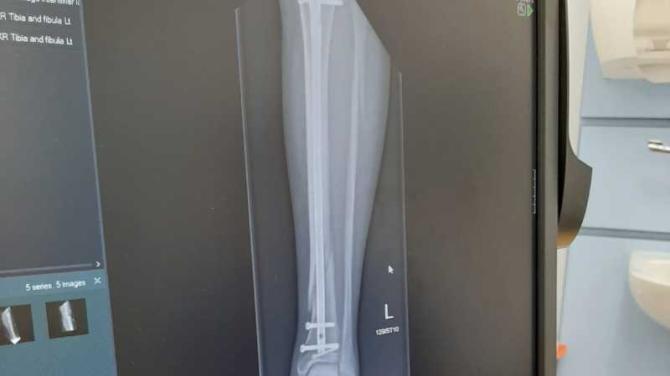 NOT a global pandemic and not even a broken leg could stop Stevey McGeown from raising vital funds for the children on Belarus once again this Christmas.

Stevey is inviting everyone to get out and get on their feet as he launches a virtual 5k and 10k dog walk.

The well-known fundraiser will be taking part on crutches and if he can do it there are no excuses for anyone else!

Stevey has previously taken on the Man vs Horse challenge, 60 ultra marathons in 60 days and last year's barefoot walk around the Mall.

And while this year's challenge might seem a bit tamer in comparison, everyone can still take part despite the coronavirus restrictions in place.

“People can take part anywhere. All you need to do is take a video of you doing it and share it with us. We'll have further details on our social media this week,” said Stevey.

“I usually do my own thing and set myself a physical challenge, such as the marathon I did. But then I went and broke my leg. My dog is blind too so it will be the blind leading the lame!

“Whenever it came to planning something for this year I was in a lot of pain. I think I can manage a 5k dog walk. I can walk a mile but I haven't managed to walk 5k. If I can walk 5k then I might attempt the 10k.

“James McGrath is going to do the 10k run for me. He would be better known as a dancer but he has never run 10k before.

“But you don't need to have a dog to take part. It's just to do something to help the orphan children of Belarus and do something of significance and push yourself out of your comfort zone. It will only take you an hour and it's not much to ask really.”

It was the thought of those kids that got Stevey through feeling excruciating pain when he broke his leg earlier this year.

“It's deadly in Belarus. You don't realise what you have until you go out there. Not only can you see it but you can smell it. You can feel it and you are stuck right in the middle of it,” he said

“When I broke my leg I was in awful pain, because I snapped the big bone completely in two, sheered off the wee small bone as well and broke the top of my ankle. I was lying in the bed and holding on to the side of the rails because I was in so much pain.

“But those kids in Belarus are in bed all the time – that's their entire life.

“There was one lad and he had a book where he recorded the temperature, the humidity, everything in a perfect line with a pen in his mouth. His mental awareness is completely there but he doesn't have use of his arms, he doesn't have legs.

“The reason he was able to do that was because the previous year one of the guys said it would be great if they had radios or something to entertain them – they didn't even have powerpoints to plug in a radio. So we went out and bought all of the equipment and put it in. We went back the following year and he was recording everything.

“On another site we went to there were six kids who had just arrived at the facility on the day before we arrived. They have their full faculties and they were wee totes but they were wild. We didn't have any Christmas presents for them because they had just arrived and we hadn't counted in their numbers, so we went out and got some things for them.”

There has been a lot of political unrest in Belarus this year. A stay-at-home mother, Svetlana Tikhanovskaya, stood against Belarus’ long-standing leader Alexander Lukashenko in this summer’s elections after her husband was jailed by the regime.

But the vote is widely viewed as having been rigged and, while she says she won by a large margin when Lukashenko declared himself victorious, she was forced into exile.

“Their borders are very tightly controlled and anybody coming in from the western world is getting questioned. It's very different,” said Stevey.

“The real problem over there is oppression. The average wage is about $400 a month. The city looks like there's lots of stuff going on but there's no suburbs. People live in high rises. In World War II it was completely obliterated, the Russians kept coming back and destroying it. You go out into the country and it's horses and carts, you have coal fires – that's how they get their heating.

We have had a tough year but they have it much worse – and they have it all the time. You don't really think you're going to witness these things until you get there.”

Stevey is a director of the International Orphanage Development Programme (IODP), which will benefit from the fundraiser – 100% of all money raised will go into the charity's pot as they have no overheads. For the past four years he has been going out to Belarus with the charity.

However, for the first time in 23 years, no representatives from the charity will be able to go out to view the work which is being done in their projects due to COVID-19.

“We have people out there who are volunteers and they'll go and check if there's anything they need,” explained Stevey.

“Last year there were 14 of us out there. We could split up and see what was going on in different areas and you do get a better idea of what's needed when you're out there, so that does present a challenge. You can react, it's more instant.

“There was a man who was going blind with cataracts. By being there we were able to pay and get his operation done. We will miss being able to do things like that.

“But maybe if things change around then we will be able to get out there in the summer and see what the craic is.”

If anyone is interested in taking part in the Virtual 5k or 10k then contact stevey@steveyj.com for a sponsor card.