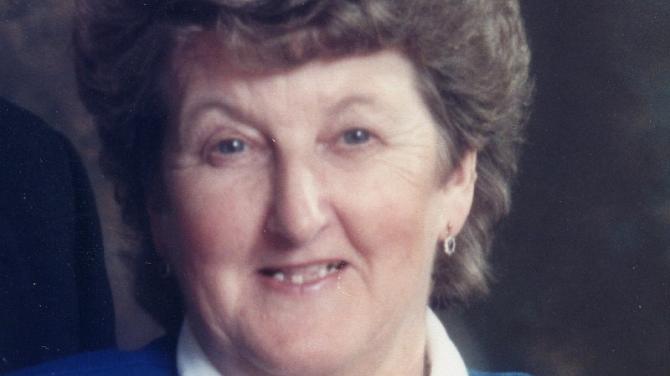 The eldest daughter of Samuel and Bertha McConnell and sister to Pauleen, Leebeth was an exceptionally devoted and loving daughter and sister.

Having trained at Stranmillis Teacher Training College she went on to teach for over 25 years at Collone Controlled Primary School where she was a greatly loved and much respected teacher.

Leebeth loved and valued every child and she loved teaching. Her patient, compassionate and encouraging nature together with a God given gift in teaching brought the best out of each child and made her classroom a happy and conducive learning environment.

On July 22, 1961 Leebeth married David Bingham of Markethill. They had a long and very happy marriage with love, respect and faith at its centre. She was a Godly mother to David, William, Pauleen, and Samuel and grandmother and great grandmother whose genuine Christ-like example of kindness, gentleness, faithfulness and love was evident to all who knew and loved her.

She encouraged her children to trust Christ from an early age and to be active in serving the Lord. Never the pusher but always the encourager she helped lay Godly foundations for her children to build on and a Godly legacy for the generations that follow.

Leebeth came to faith in Jesus Christ at a mission in Annalong Presbyterian Church in 1960. She was a very active member in 1st and 2nd Markethill Presbyterian Church where she sang soprano in the choir as well as occasionally acting as choir mistress and organist.

She was a founding member of the Women’s Missionary Association, later Presbyterian Women’s Association, where she served for a time as President. She also taught in the Primary Sunday School.

It was her service to the Girls’ Brigade that brought her the most pleasure in church life. She wrote to the Minister and Kirk Session for permission to allow her to set up a company of the GB in Markethill and over the years she gathered a team around her of leaders and helpers that has had a profound impact on many young girls in the church and community.

She went on to serve as Kommandant in the Mid Ulster District.

In November 2003 Leebeth was diagnosed with a malignant brain tumour which had a profound impact on her life with many treatments and appointments at various hospitals. She was wonderfully supported throughout this period by her late husband David who died in February 2015.

Throughout the next 17 years she placed each day in the Lord’s hands and had great peace, comfort and hope through Christ. Godliness with contentment is great gain. It was with such peace and comfort that she went to be with her Saviour. Now with Christ which is far better.

A devoted mother, sister and aunt she is predeceased by her husband David and niece Leebeth and survived by her children David, William, Pauleen and Samuel, 10 Grandchildren Amy, David, Stephen, Ruth, Beth, James, Jane, Harry, Lucy and Katy, one Great Grandchild Eliza, Son in Law Derrick, Daughters in Law Gillian, Janet and Lorna, her sister Pauleen and her family Lewis and Freda.

“An excellent wife, who can find? She is far more precious than jewels…the heart of her husband trusts in her and praise her...her children rise up and call her blessed…many women have done excellently but you surpass them all...charm is deceitful and beauty is vain, but a woman who fears the Lord is to be praised”