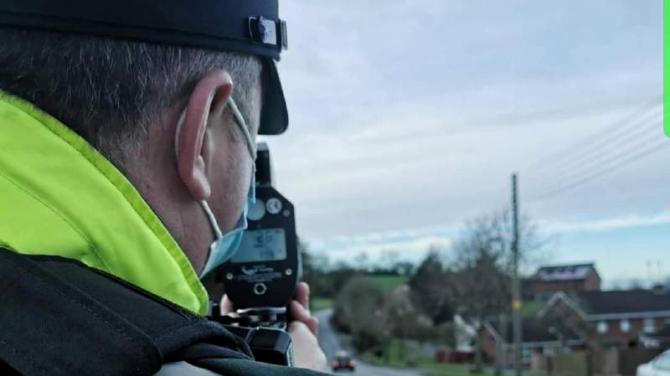 A NUMBER of speed operations have been carried out by the Armagh Neighbourhood Policing team in the Richhill area.

It followed concerns raised with police from local residents and councillors who highlighted a number of roads within the village where speeding has become an issue.

Inspector Kieran Quinn said local neighbourhood police officers had conducted a number of speed operations after being made aware of speeding problems in the Richhill area.

“Officers stopped a number of vehicles and engaged with the drivers,” Inspector Quinn told the Ulster Gazette.

“Carrying out such speed operations in specific areas is common practice where members of the public or local councillors raise concerns.

“We will be continuing with these operations in the Armagh, Banbridge and Craigavon areas over the coming weeks.”

Inspector Quinn said road safety is and will continue to be a key priority for the police and “it should be everyone’s priority”.

“Paying more attention to our surroundings and reducing our speed are the greatest contributions each road user can make to create safer roads,” the senior police officer said.

“Our road safety message is very simple. Do not speed; Pay greater attention to your surroundings; leave the mobile phone alone; always wear a seatbelt and NEVER, EVER drive after drinking or taking drugs. Look out for other road users.

“Whether as a driver, a motorcyclist, a pedestrian or a cyclist, we all share the roads and the responsibility for road safety.

“If everyone follows this advice, then together we can save lives and prevent injuries on our roads.”

DUP Alderman Gareth Wilson has praised the PSNI for carrying out the speeding operations in Richhill.

“As we know speeding is the cause of many accidents and sadly fatalities across the Province and it is important that everyone drives with due care and attention, especially giving regard to the speed limit in any residential setting,” Alderman Wilson said.

“As with a number of local towns and villages in the district, speeding is an ongoing issue in and around the roads of Richhill village.

“I know that residents have concerns about this and it is all the more important given the fact Richhill has many young families and young kids are out and about on bicycles and enjoying the outdoors.

“It is essential that speed limits are observed in Richhill and I thank the PSNI for their activity in regards to road safety,” Alderman Wilson added.