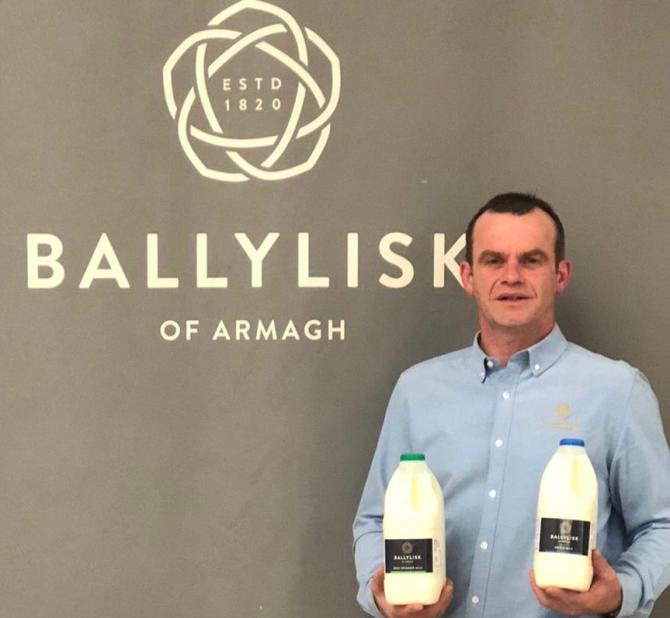 THE community is in shock following the sudden passing of Ballylisk Cheese owner Dean Wright. He was 48.

A spokesman said: “A post mortem is scheduled to determine the cause of death. However the death is not being treated as suspicious at this time.”

Mr Wright’s background was in the meat industry. He started to work with his father, Jim, in 2006. While continuing on with mixed farming, he became interested in making cheese in 2015.

According to the company’s website, Dean spent years perfecting his cheesemaking.

It adds, “He makes it every day. He talks about it. He works on new ones. He even thinks about it in his sleep!”

The firm’s Triple Rose cheese was stocked by Fortnum and Mason, the Queen’s grocers, in London.

Speaking to the Ulster Gazette last year, Mr Wright - whose company was formed in April 2018 – explained how he had to diversify his business in light of the pandemic.

Ballylisk Dairies had been supplying cheese to high end hotels and restaurants, which were literally closed overnight, after the government imposed measures to keep everyone at home.

In order to sustain the company and avoid furloughing his four members of staff, Mr Wright told the Gazette he “thought outside the box” and in turn came up with the idea of bringing his local quality produce to people’s homes.

While this was a totally new market, the success was phenomenal and the company had also been able to help other local artisan businesses by providing an outlet for their produce.

Mr Wright said: “In reality in the face of a disaster the company has turned this into another line of business.

“March was a really difficult time. Within 24 hours of lockdown we lost 70 per cent of our business. I didn’t know what I was going to do as I knew the business wouldn’t survive on 25 per cent turnover.

“We had a milk pool on the farm which we were capable of making our own cheese from. I thought to myself, the obvious thing to do here is bottle that milk and actually take it to the customer, so that’s what we did.

“Within four to five days we turned that round with legalities but saying that we had the bulk of it there for the pasteuriser checking and things like that for the cheese business, so it didn’t take a lot more to get it up and running.”

Newry & Armagh DUP Assemblyman William Irwin MLA stated, "This is very tragic news and I express my sincerest sympathy and condolences to the entire Wright family at this very difficult time.

"Dean was a well known individual in the district and a hard working farmer whom I had gotten to know well over many years. I had spoken to him many times as he actively worked developing new products using milk from his busy dairy farm and I know that his products, such as his Ballylisk cheese, were so popular in the district and indeed in markets much further afield.

"He will be sorely missed by his family and the wider community.”

“I want to pass on my sympathy to Dean's Family. Dean was a passionate and proud advocate of his business, Ballylisk of Armagh and I had the pleasure of visiting them on many occasions.

“He was a beacon for the ABC Council area food heartland and won many awards for his fantastic cheese. He was passionate about local food and helping our local food industry.

“Dean was never slow in helping others out and his company supplied me with Christmas food hampers which in turn I gave out to local community groups. Dean contacted me at the start of lockdown about a cheese order that was cancelled and wanted me to help him deliver it to a local foodbank Via Wings as he didn't want it going to waste. The value of this was £2000 and he took that loss to help those in need. That was the measure of the man.

“Hardly a week went past that we didn't have at least a conversation when we spoke about many things, least of all putting the world to rights about farming, local food and opportunities for business. Dean was an inspiration to many people and helped many people involved within the local artisan food industry. Dean will be sadly missed by his family and by his many friends. My thoughts and prayers are with them all including Chloe and the rest of the staff at his business.”

“Yesterday morning I received the devastating news regarding the death of local farmer and businessman Dean Wright. This is an absolute tragedy for the family, local community and the entire farming and food sector within Northern Ireland.

“Having known Dean, along with his mum and dad and the entire family circle for all my adult life, they are a very hardworking and respected family. I extend my deepest heartfelt sympathy to the entire family at this difficult time.”