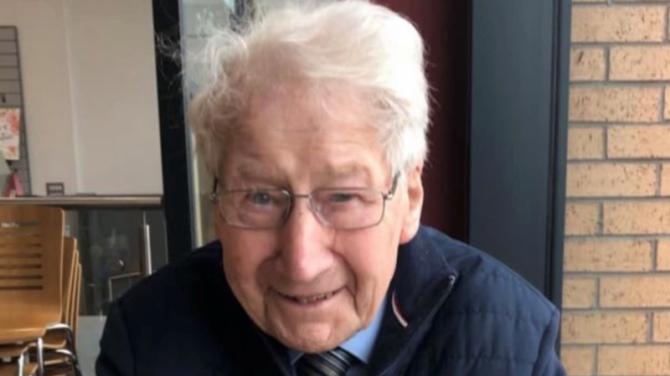 IF you know anything about Presbyterianism or the Boys’ Brigade in Co Armagh, you may be aware of the name Jim [Jimmy] Boyd. A passing knowledge of Irish League football also might help, though it’s not essential.

Certainly that name will be one known to older readers, both in the Cathedral City and nearby Portadown, for Jimmy Boyd is a man who has made a significant impact in both.

Friday, March 26 was his 100th birthday and the volume of cards, letters and emails he received bore testament to the regard and respect in which he has long been held.

Now a widower, these days he lives in Ballymoney with Lorraine, one of his six daughters. He and his late wife, Pamela - whom he met in South Africa – married in October 1944. Between 1946 and 1963 the couple had eight children; Valerie, Raymond, Rosemary, Lorraine, Pamela, Jim, Maureen and Brenda.

The Boyds moved from Moneyreagh in East Belfast to Armagh in 1953 when Jim, who worked for the then-massive General Post Office, was transferred. Back then the GPO was wholly responsible for the UK’s telephone service and network, the branch in which Jim was employed.

Initially the family settled in Lisanally Gardens, following which they moved to Taylor House, Farmacaffley on the Keady Road and then to Killuney Drive. Each move was commensurate with the steadily-growing family’s need for more space.

Jimmy was in his early 30s when he left Northern Ireland’s capital city for the quieter environs and more gentle pace of Armagh. Before doing so, he had sought his minister’s advice on which church he should join. The answer he received was The Mall Presbyterian Church (3rd Armagh), so there it was that he pitched his spiritual tent, going on to serve as an elder, BB officer and Sunday School teacher.

So it was quite a loss when, in 1964, the GPO transferred him to Portadown where he set up home at 2 Charles Park in the then-new Corcrain housing estate. The family’s new spiritual home was 1st Portadown Presbyterian Church of which Rev William Craig was minister.

Here the path followed the same route as before – Sunday School teacher, BB officer and, ultimately, an elder once again when – having got to know this newcomer - Edenderry’s members displayed their trust and confidence in him by electing him to that position.

That will come as no surprise to anyone who has known him, for in harness with integrity, his warmth, humour and generosity of spirit always have made him a popular figure whose hallmark features have been a twinkle in his eye along with an ever-present but never-threatening sense of mischief, for while banter has floated his allegorical boat, faith in God has been his anchor.

When he retired, he and wife Pamela moved to the The Avenue, just off Portadown’s Gilford Road. His wife died in 2002 and Jimmy continued living there alone until October 2020 when he moved to Co Antrim to live with daughter Lorraine.

His involvement in the BB facilitated his love of sport in general and football in particular, and moving to Portadown when he did meant Jim had entered a veritable lion’s den which provided him with endless wind-up opportunities and material.

A couple of years earlier, when Isaac McDowell-coached Linfield had completed a clean sweep by winning all seven trophies available to them, it was Gibby MacKenzie's Portadown who had finished runners-up in the Irish League and the Irish Cup. All of that, of course, was hard to take for a dyed-in-the-wool Glentoran supporter.

But shortly after his arrival in Portadown, the Glens secured the services of a six-foot, 29-year-old Glaswegian called John Colrain who had played for Celtic, Clyde and Ipswich Town. ‘Big John’ joined as player/manager in 1966 and promptly set about turning the Glens into a tour de force.

A 1-1 home draw against Rangers in the 1966/67 European Cup Winners’ Cup set the tone for what was to follow and his first season in charge ended with ‘the wee Cock ‘n Hens’ having won the Irish League, City Cup, Ulster Cup and Gold Cup, following which Colrain took his team – temporarily renamed the Detroit Cougars - to North American for a tour from which they returned as unbeaten heroes.

Between 1966 and ’70 the Glens were unbeaten by European opposition at The Oval, and as well as that draw with Rangers their results included another memorable 1-1 result against Benfica (Eusébio et al), in the 1967/68 European Cup.

With the second leg match in Portugal having finished 0-0, Glentoran became the first team ever to exit as a result of the then-new away goals rule. Benfica went on to make it all the way to Wembley where Manchester United beat them 4-1 after extra-time in the final.

So in those early years after moving from Armagh to Portadown, the Glens’ spectacular successes provided Jimmy with a huge stick with which to stir the town’s always-simmering football pot!

His other claims to fame in football circles include years of service as a referee in the keenly contested Portadown and District Battalion BB League.

The rivalry between 4th Portadown (Edenderry Presbyterian) and 7th Portadown (Edenderry Methodist) in particular became the stuff of local legend. In addition, former members of 1st Portadown (Thomas Street Methodist), 3rd Portadown (St Mark’s), Tartaraghan, Ahory, Milltown and Knocknamuckley also attest that, in the case of one or two players famed for ‘not taking any prisoners’, Jim used to warn them before kick-off that he had already taken their names to avoid having to stop the match to do so’

He told probable malefactors, “You know and I know that you’re going to end up in the book anyway, so let’s just get that over and done with here and now!”

But there has always been more – much, much more - to his make-up and personality than a repertoire of football-related quips to quell the quarrelsome, for beneath all of that jocularity there has been an abundance of good grace, sensitivity and kindness.

ABC District Councillor, Kenneth Twyble – a long-time Captain of 7th – assessed his old friend and rival’s quality as a man by saying, “Jimmy and I worked with BB football for more years than I can remember and he just seemed to be evergreen.

“In all the time I have known him he has shown a wonderful commitment to God and to his faith, as well as a love for young people. He has been an amazing man – just a lovely, wonderful individual who has now reached this remarkable milestone. His faithful walk with God and his willingness to have spent so much time working with and for young people really sum him up as someone very special indeed.

“All my memories of Jimmy Boyd are good ones and I am delighted for him that he has made the century. No finer or more deserving man.”

It is almost 70 years since Jimmy Boyd came to Co Armagh and in that time, over and over again he has proved himself to be a friend, an ally, a comforter, a confidante and trustworthy advisor to many. In short, his is a life that has served as proof of the vitality and validity of the faith he professes.

No-one knows - or will ever know - the number of discreet visits he has made over the decades to the sick, the lonely, the bereaved, the heartbroken, the ashamed, the remorseful and the despairing. Not to preach, not to criticise, not to condemn, but simply to comfort by virtue of the fact that he has valued that individual sufficiently to have visited them when others did not. Numerous people can confirm that as having been their personal experience of Jimmy Boyd.

Personal tragedies in his own life notwithstanding, at many times throughout his still-unbeaten century he has put the needs of others ahead of his own. Co Armagh has been privileged and blessed to have had such a man living in its midst.