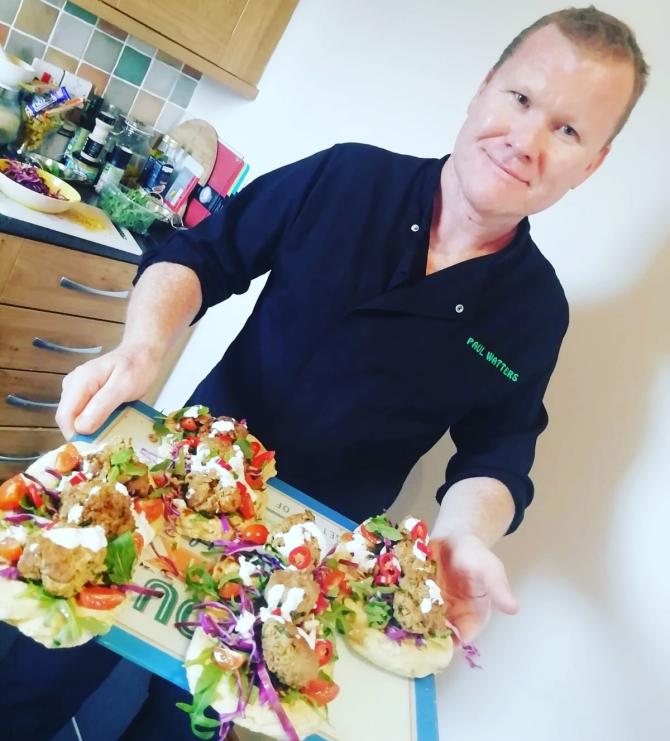 Paul Watters with his lamb koftas

2 sprigs of rosemary picked and chopped

Mix the flour salt, pepper and rosemary in a large mixing bowl

Add 2 tbsp of olive oil. Stir in the yoghurt and bring together as a dough.

Turn onto a floured surface and knead briefly until smooth.

Preheat a non-stick frying pan over a medium heat. Roll out the first ball into roughly 15cm on a well-floured surface. With the remainder of the olive oil brush one side and add to the pan oiled side down cook for approximately two minutes until golden brown underneath.

Brush with a little oil and flip and cook for another two minutes. Repeat with the rest of the balls but be careful as the pan will get hotter, so the adjust heat if necessary. While each flatbread is cooking start rolling out the next, repeat and once flat breads are cooked keep warm in a clean tea towel.

In a food processor blend the chickpeas along with the herbs, salt pepper and onions until smooth.

Add mince, egg and breadcrumbs until a stiff ball is formed. Shape into roughly ping pong size balls. Place them onto a plate - this should give you 16 balls. Allow them to rest in the fridge for two to three hours before cooking, this will help keep them firm.

Then fry in a little sunflower oil and cook for three to four minutes each side until golden brown.

¼ of a red cabbage finely shredded

Once the flatbreads have cooled, arrange on a serving platter, arrange some rocket on each. Add some fresh red cabbage, add cherry tomatoes, place lamb koftas in the middle of the bread.

Spoon over the yoghurt dip sprinkle over the sliced chilli and garnish with fresh picked mint and serve at once.

This recipe is devised by Paul Watters - an author of “Simple Tasty Healthy by PW”. You will find me on Facebook under the mentioned above name, please feel free to contact me regarding any further recipes on paulwatters35@gmail.com.